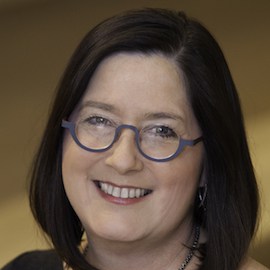 Evelyn Stark serves as assistant vice president for Financial Inclusion for MetLife Foundation. Her responsibilities include developing and managing MetLife Foundation’s financial inclusion strategy for reaching millions of low-income people, globally, with access to high-quality financial services.  Her grant profile is global, with a concentration on innovations in products and service design and delivery.

Prior to joining MetLife in August 2013, Stark was a senior program officer with the Bill & Melinda Gates Foundation Financial Services for the Poor team.  From 2003 to 2008, she worked for USAID’s office for MicroEnterprise Development and the World Bank’s Consultative Group to Assist the Poor focusing on the provision of financial services for the most vulnerable populations. From 1996 to 2003, Stark lived in Uganda, working throughout sub-Saharan Africa implementing programs in financial inclusion, training and mentoring on demand-side research and working with financial institutions to upgrade skills and the ability to serve low-income consumers.  Prior to moving to Uganda, Stark managed commercial real estate special asset portfolios for bank and non-bank financial institutions.

Stark received her Bachelor of Arts degree in International Relations and Economics from Bucknell University in 1989.

Stark was a Presidio Institute Fellow in 2016; she serves on the board of Commonwealth, and is on the advisory committee for the Center for Financial Inclusion at ACCION.