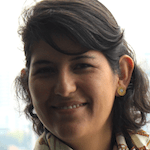 Jenny Melo has dedicated her professional life to understanding and promoting the intersection between business and development and sustainability. As independent researcher and consultant she has worked on corporate social responsibility, inclusive business, social innovation and social impact business models. In 2015, she co-founded Innove, a think-and-do tank focused on sustainability, and she currently serves as the knowledge director. As a consultant and researcher, she has written various discussion papers on inclusive business, social inclusion, social innovation and inclusive agriculture, for international bodies such as the Inter-American Development Bank, the SNV Netherlands Development Organisation, the International Center for Tropical Agriculture, the German Cooperation Agency and Ashoka, among others. As a diffuser and promoter of new business paradigms, she was editor of the Latin American version of NextBillion from 2010-14 and of the Líder Agente de Cambio website in 2015, which is focused on business with purpose and run by Ashoka Mexico. Since 2008 she edits her own blog, labuenaempresa.com. Jenny studied business administration and earned a master’s degree in social sciences. She currently lives in Medellin, Colombia.