The dull flicker of a yellow and black sooty flame is a poor source of light, especially for reading, writing or performing a delicate manual task like weaving baskets. It emits toxic fumes, which are harmful to people and the planet. Yet despite the many drawbacks, kerosene wick lamps are still used by hundreds of millions of people living off the grid in sub-Saharan Africa.

“I could remember those days in secondary school when we had to prepare for examinations with kerosene lamps. I had to start wearing glasses because my sight went bad. It was not a nice experience to study with kerosene lamps. Outside of the health implications from the smoke, it is not bright enough, so one needs to strain the eyes to see.”

Kerosene causes inconvenience in the lives of people who must use it to light their homes and businesses. And we know the other human impacts of kerosene lighting well: burns, fires, inhaled toxic smoke, high cost and poisoning hazards for children. We believe no one should suffer this way  when there are affordable and available solutions like off-grid solar lighting. Everyone should have access to clean energy – to stop this human suffering, and also for the sake of our shared planet. 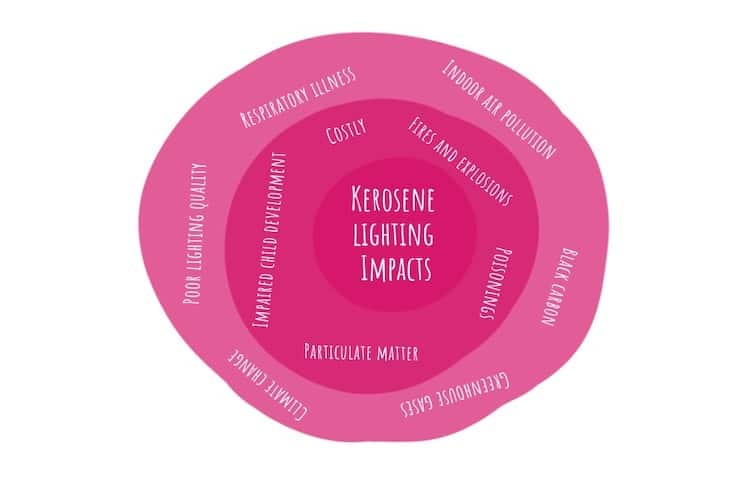 The Impact of Moving from Kerosene to Off-Grid Solar

Recently scientists showed that planting trees is one of the best ways to address the climate crisis and prevent temperatures from rising beyond 1.5. However, reforestation is no silver bullet to solving the climate change crisis, it’s just one part of a larger portfolio of solutions. One of these solutions is transitioning from kerosene lighting to off-grid solar lighting.

If every household in sub-Saharan Africa switched out just one kerosene light for a solar light, nearly 100 million metric tons (MT) of CO2e would be avoided[1] – equivalent to the carbon sequestered by planting over 1.5 billion trees and allowing them to grow for 10 years. As a result, shifting from kerosene lighting to solar lighting not only improves livelihoods and health, but also serves as a climate change mitigation measure. That connection is highlighted in the UN Sustainable Development Goals (SDGs), where achieving affordable and clean energy for all (SDG7) is closely linked to climate action (SDG13). 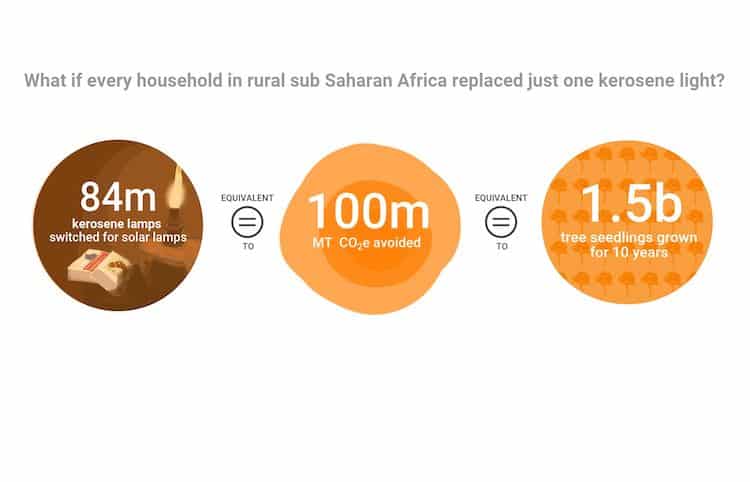 The use of kerosene lamps contributes to climate change in the same way as the burning of other fossil fuels does, by releasing CO2. The difference is that kerosene lamps also emit a significant amount of black carbon, a short-lived but potent greenhouse gas. Many climate practitioners are now interested in reducing black carbon to help mitigate climate change, since 1kg has the same amount of warming potential as 700kg of CO2 circulating for 100 years. With almost 10% of kerosene fuel converted into black carbon particles after it’s burned, a significant amount – approximately 270,000 metric tons – of annual black carbon emissions comes from kerosene lighting worldwide. This amount of black carbon has a warming potential equivalent to almost 5% of the United States’ total CO2 emissions – roughly 240 million MT of CO2. 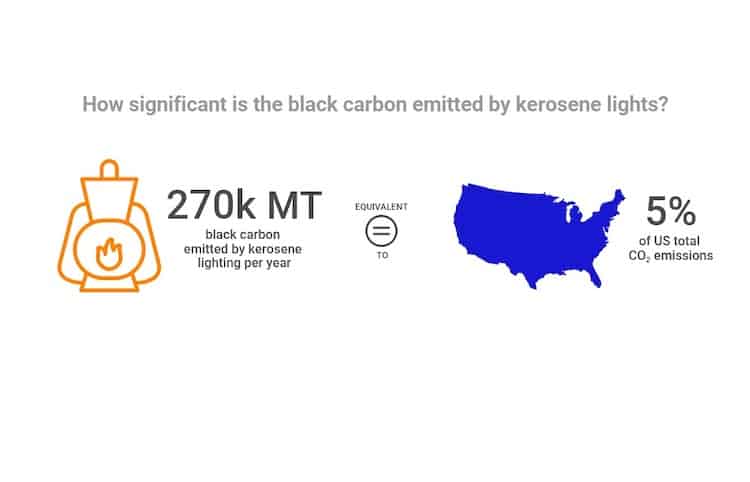 Although kerosene lighting used in sub-Saharan Africa emits significant amounts of greenhouse gases, the region is responsible for only a small fraction – less than 4% – of global greenhouse gas emissions. Nevertheless, it is one of the most vulnerable regions to climate change – and last-mile communities are already experiencing the negative impacts.

Nkiru Nnam sees how climate change is affecting the communities where she works in Nigeria: “I notice changes like seasonal lag, more frequent excessively hot temperatures and soot in the air during rainfall, which causes the rain to appear black,” she says. Sharia Kanoghwe on Solar Sister Tanzania’s business development team observes similar impacts, noting the abnormal amount of snow melting on Mount Kilimanjaro. 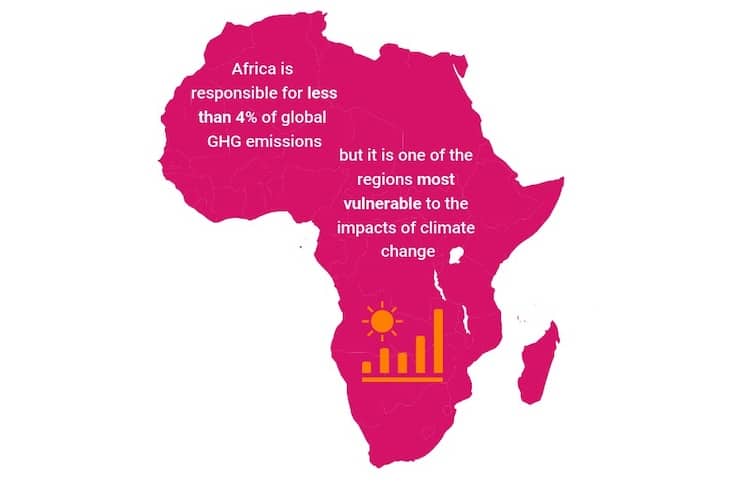 The Role of Entrepreneurship in Moving Toward Clean Energy

Both Nnam and Kanoghwe agree that increasing clean energy access through entrepreneurship is an important part of local climate action. “I train entrepreneurs to start discussions about the effects of climate change on their communities. I educate them on the importance of using solar energy products that reduce emissions and encourage a safe climate,” Nnam says. In Tanzania, Kanoghwe has also seen how social enterprises are combating climate change by “distributing solar energy, which reduces the amount of kerosene used by communities.” For example, since 2010, Solar Sister has avoided nearly half a million metric tons of carbon dioxide equivalent and black carbon emissions by replacing kerosene lamps with high-quality off-grid solar products. This is equivalent to taking over 100,000 passenger vehicles off of the road.

Given that solar lamps are affordable and readily available, one would think that replacing kerosene lighting in last-mile communities would be a simple measure to reduce GHG emissions. However, reaching last-mile communities with clean energy solutions requires a deep understanding of customer needs and preferences, as well as an effort to build trust in new technology. Reaching these communities also requires local leadership and buy-in, along with the support of local networks. The challenges of poor transport and road networks, remote geographies and low-income levels hinder distribution chains and commercial marketing. That’s where community-based social entrepreneurship comes into play. Social enterprises, like Solar Sister, work with local networks of entrepreneurs to reach last-mile communities with off-grid clean energy products.

Nkiru explains firsthand how Solar Sister’s women entrepreneurs build trust in clean energy: “Solar Sister entrepreneurs are able to convince their customers on the importance of living a safe life by using clean energy products, and I also make sure that these products are made available when needed.” Nkiru also takes the lead in community education – leading presentations all over Nigeria on the health, economic and environmental benefits of renewable energy. She demonstrates new products and gives hands-on trainings that further build trust in off-grid solar lighting. Nkiru and the entrepreneurs she has trained have convinced hundreds of customers to replace their kerosene lighting with off-grid solar to combat climate change and improve their quality of living. While Solar Sister entrepreneurs alone cannot replace every kerosene lamp in the world, the model of centering women entrepreneurs in last-mile communities is a great example of the power of social entrepreneurship.

Replacing kerosene lamps may seem like a small step in terms of climate change mitigation, but doing so for millions of households across the world would have a substantial collective impact. Globally, households without access to electricity produce about 190 million MT of CO2 per year from kerosene consumption. That’s equivalent to the emissions produced by 50 coal-fired power plants every year. 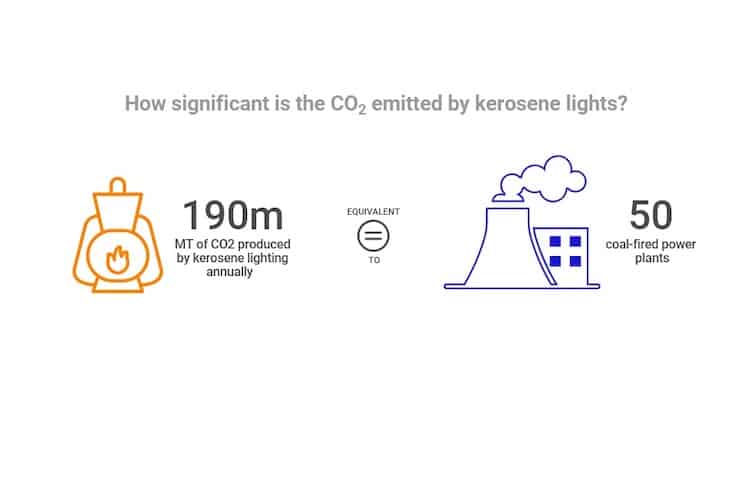 A worldwide replacement of kerosene with off-grid solar lighting would not only reduce global greenhouse gas emissions, but also transform the lives of billions. In sub-Saharan Africa, increasing access to off-grid solar lighting is an excellent way to eradicate energy poverty, to improve health, productivity and security, and to motivate local climate action. The need for investment in models that go beyond business-as-usual is urgent. Eradicating kerosene is possible – and social entrepreneurship models can get us there. But more investment in successful models is needed.

Solar Sister works with existing women’s networks to increase access to clean energy and eradicate kerosene usage. Many social enterprises like Solar Sister, such as SolarAid, Frontier Markets and others, illustrate the global potential of social entrepreneurship in achieving global kerosene replacement. But we need to reach more people quicker. Investment to scale such business models could banish kerosene and bring us closer to eradicating energy poverty. What more are we waiting for?

Alicia Oberholzer is a former communications fellow and Fid Thompson is Communications Director at Solar Sister.