In 1999, I moved from a Silicon Valley investment firm to the New York financial universe, where I began working at Chase Manhattan Bank on its mergers with JP Morgan and Bank One. I had gone from providing venture capital to innovative tech startups, like Apple and Amazon, to helping one of the world’s largest banks get even bigger. The scale of the professional possibilities and corporate opportunities in these industries was staggering – but so was their tendency to pursue profit at all cost, regardless of their social impact.

I got a taste of the social sector world a few years later when I began consulting to large nonprofits and universities. After my years in the financial sector, I was excited to help organizations that were pushing back on economic inequality or looming environmental crises. Instead, I encountered organizations that often weren’t well-funded enough to be consistently effective on a large scale. While their counterparts in tech and finance tended to overlook the importance of social impact, these organizations had a similar blind spot when it came to the value of profit, growth and financial sustainability. This was my first real introduction to the power of integrative thinking.

Beyond ‘Good vs. Evil’

The term “integrative thinking” was coined by Harvard Business School professor Roger Martin. It means to bring together two seemingly contradictory ideas in order to innovate something new. As I saw it, this was exactly what the world needed: organizations and leaders across sectors that can develop effective solutions to global challenges that were also profitable and scalable.

“It is overly simplistic to perpetuate the notions of the evil capitalist and the righteous social worker.” That’s what Jed Emerson, a pioneering leader of the impact investing movement and the founder of blendedvalue.org, told me. His words echoed my personal experience. Leaders who want to make a dent in solving global challenges need flexible thinking. They must be able to innovate new products and organizations without rejecting traditional business models as fundamentally bad. They cannot afford to take an either/or approach to success.

In my research, I’ve also discovered how leaders capable of integrative thinking begin their enterprises. They usually start with a big well-defined global challenge. How big? How about the fact that only 44 percent of school-aged children in India complete 10th grade? Or that 3 billion people in the world are financially underserved? Or that over 700,000 children die each year due to poor sanitation and millions more are impacted by inadequate sanitation? Once a challenge is identified, leaders come up with innovations that could solve these social problems in a commercially profitable way.

Here are a few solutions generated by some particularly innovative practices of integrative thinking.

India has been experiencing a massive baby boom for so long that, today, there are more than 400 million school-age children in the country. And, as mentioned above, less than half of them complete 10th grade. This isn’t because education is perceived to have a low value. In fact, surveys show that Indian par­ents of all income levels view education as the key to their children’s future – and they are even willing to pay for private schooling. The challenge is more that parents have little faith in underfunded government-run schools – and that the 200,000 small grassroots private schools around the country lack capital and capacity.

This situation inspired two social entrepreneurs, Steve Hardgrave and Brajesh Mishra, to start a Bangalore-based company called Varthana. The massive boom in India’s student-age population is a situation “that has never occurred and will never occur again in the history of the world,” Hardgrave said to me. The country’s future will be shaped by how quickly school-age children get access to high-quality affordable education.

Varthana is changing the ecosystem of education in low- and middle-income countries with a swelling population. Their business integrates social good with profit by providing financial products and advisory services to local school owners to grow affordable private schools. Since its inception in 2013, Varthana has dispersed more than $35 million in loans to private schools and recently raised about $50 million from ChrysCapital Advisors to accelerate its work and impact.

Today it’s incredibly hard for billions of people to borrow money. Although many of them will reliably pay back loans, their lack of financial profile means they have no chance to get them from banks. As a result, a huge chunk of the world’s population – about 3 billion people – is cut off from the most efficient ways of saving against disasters or investing in their businesses.

After working at UBS and Citigroup, Tala CEO Shivani Siroya knew all about how the traditional credit system works — and doesn’t work. She developed an approach to this challenge that was both novel and, once you hear about it, seemingly inevitable. Credit is essentially information. But decades into an infor­mation revolution, the way we measure credit has not changed dramatically from the mid-twentieth century. Meanwhile, while roughly a third of the world’s population has no financial record, there are a billion smartphone users in the developing world.

Seeing the opportunity in these statistics, Tala created an Android app that brings credit scoring into the future. Once borrowers download the app, it tracks over 1,000 data points — generated by everything from texting friends to getting directions — that don’t appear on traditional credit reports. According to Siroya, over time this data provides a rich picture of a person’s financial life. This allows Tala to extend credit to people who are often walking a fine line between some degree of financial security or entrepreneurial success on one side and extreme poverty on the other.

Over 2 billion people in the world don’t have access to proper sanitation systems. But their waste has to go somewhere. All too often, that means it ends up in the water supply of millions of people, where it will sicken or even kill many of them. Absent a massive municipal expenditure, this is the ultimate challenge to the integrative thinker: how to profitably turn something literally no one wants into something profitable. But the inventors of the Omniprocessor took integrative thinking a step further by not just getting rid of human waste, but producing something everyone needs in the process.

The Omniprocessor works by burning human excrement safely at extremely high temperatures. Instead of using tons of fuel, like most sewage plants around the world, the device combines innovative technology in solid fuel combustion, steam power generation, and water treatment in a unique energy-efficient way. It even produces excess electricity and clean drinking water from that waste.

The next generation Omniprocessor, which is being piloted in Dakar, Senegal, has the capacity to handle waste from 100,000 people and to produce 86,000 liters of potable water a day and a net 250 kilowatts of electricity. The machine will run on a system of sensors and webcams that allow the engineers to control the processor remotely and diagnose challenges with the team in Dakar.

Integrative thinking isn’t the only element of the leadership mindset that has powered these entrepreneurs. And it’s not the only thing required to successfully innovate solutions to global challenges. But it is essential. Hopefully, the successes of these companies – and hundreds of others – will encourage an increasing number of future leaders to take on global issues by starting a profit-driven enterprise. But for that to happen, ultimately we must stop framing the issue as “profit versus social good.” 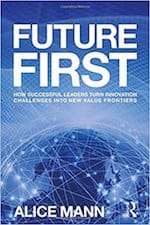 Global challenges are best solved by leaders who integrate both profit and social good into their organizations.  “Future First” demonstrates how leaders can adopt integrative thinking, along with other key mindset elements, to solve the biggest global challenges in a profitable and scalable way.  Chapter 4, “Free Your Mindset,” will show you how to begin developing a future-first mindset and is being given away as a complimentary download in NextBillion’s weekly e-newsletter during the month of May. Click here to subscribe.

Alice Mann is an organizational psychologist who advises leaders of global Fortune 500 companies, preeminent nonprofits and social enterprises. She is the author of “Future First: How Successful Leaders Turn Innovation Challenges into New Value Frontiers.”