Control vs Ease of Use: Low-Income Customers Weigh In on Financial Services

Twenty-first century financial tools share a preference for automated functioning. This is evident in everything from bill pay to round-up savings plans. New tools use automatic features to make life easier for consumers.

But evidence shows that this increasingly does not work for everyone.

Low-income consumers and those with uneven cash flow are hesitant to participate because their need for control of their cash flow outweighs the potential benefits of automation.

So how do we reconcile this seeming disconnect? Does “control” outweigh “ease of use”? We recently needed to understand this at a deeper level in order to help design a tax savings solution for Payable, a 1099 payments company serving the growing gig economy.

The case for automation

W-2 workers automatically have their income, Social Security, disability and other payments deducted by their employer, leaving them with a “net” pay. By comparison, the 54 million contractors in the gig economy in America are responsible for managing all those tax payments themselves. This clearly takes time and mental energy to manage. So, it was no surprise that our 2016 survey showed that almost 50 percent of 1099 workers wanted an automatic mechanism to help them save for their quarterly tax payments.

The case for control

Most 1099 workers have high-income volatility. Over the course of a year, a contractor’s income fluctuates 10 times, from the lowest-paid month to the highest. With this amount of uncertainty, it’s reasonable that withdrawing roughly 30 percent from each payment for taxes would create fear and insecurity, and thus people would opt for more control. Given this, we theorized that the optimal solution would be one that gave people more control of their money and still enable them to pay their tax bill.

This was confirmed by an 800-person follow-up survey we conducted with contract workers. Respondents expressed the most concern about accessibility of their tax fund money. 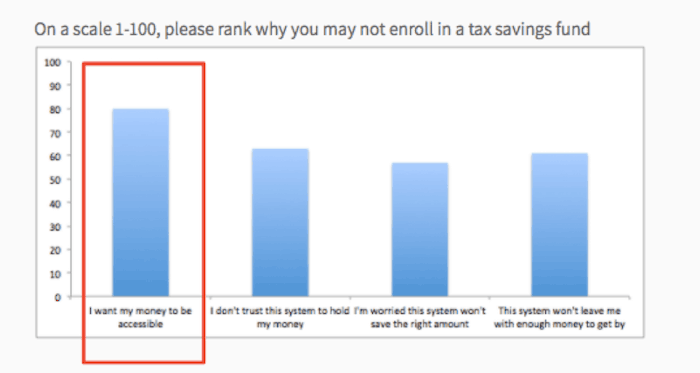 Which is the stronger force?

Which of these competing preferences was more important? To understand whether people’s expressed concerns about accessibility were representative of their actual behavior, we ran a test.

Payable asked its users if they wanted to enroll in this new tax fund and then had them go through the process of signing up for it, with a twist.

For some Payable users, we emailed a promotion that focused on the benefits of automation: “Do you want to sign up? We will automatically save the right amount.”

For other Payable users, we emailed a promotion that focused on accessibility and their ability to stay in control: “Do you want to sign up? You can approve transfers and withdraw at any time.”

Good news. Both versions demonstrated a clear demand for a 1099 tax savings program. Across both versions, an average of 13 percent of people who opened the email clicked to say they wanted to sign up for the tax fund. That’s a substantial number of 1099 contractors with a desire to get help saving.

This is what we call the “say/do” dilemma. People may say they want something, but that doesn’t necessarily represent their behavior – what they will actually do.

In this case, 1099 contractors said they wanted high accessibility of their money, but when given a choice, they opted for an option that was less work. In hindsight, this all makes sense. Imagine how difficult it would be for W-2 employees to shift to handling their taxes manually. While theoretically it may be nice to have this agency and power, taxes are likely something that you’d prefer not to spend time thinking about.

The takeaway: We need to support businesses that help 1099 workers manage their tax liabilities or – even better – support policies that allow for automatic withholdings by the company to further reduce the burden on the end user.

First, hiring companies can help by opting for a payroll system that allows 1099 workers to receive payment into two different accounts, including one designated to pay their taxes.  Most W-2 workers can elect to have their paycheck automatically deposited in a savings account and a checking account. Contract, or 1099, workers need the same benefit.

Second, many contractors owe quarterly taxes. However, in our 2016 study of Payable users, only 16 percent knew they needed to pay quarterly taxes. As a hiring company, you can notify your 1099 workers that they should be saving for taxes in general and have quarterly deadlines.

And last, we need third-party solutions to step up and fill the gap. The burden cannot fall on the employee and it’s unrealistic to imagine employers will accept all of it. Thus, we need organizations that can act on behalf of 1099 workers to provide these services that have proven demand in the market.

Kristen Berman is a co-founder of Duke University’s Common Cents Lab, which is supported by the MetLife Foundation.  Brad Swain is a behavioral researcher at the Common Cents Lab.