The G8’s goal to increase private sector investment in Africa could offer new solutions to global hunger or it could be the new face of a failed solution.

G8 leaders expanded the New Alliance for Food Security and Nutrition last week in the lead up to the G8 Summit in Northern Ireland. The New Alliance, started by the G8 last year, has an ambitious goal of lifting 50 million people out of chronic poverty over 10 years. In 2012, $4 billion was committed in support of private sector investment in African agriculture. British Prime Minister David Cameron explained last week: “For business, it’s about harnessing the power of enterprise to educate people on the importance of nutrition, in order to sell healthier food and make a commercial return while also transforming lives.”

African countries that sign on to the Alliance can expect big money from corporations: over $3.8 billion is expected to flow to the three newest members of the Alliance–Nigeria, Benin and Malawi.

More than 70 companies, including 53 from Africa, are part of this new set of investments, but they come with a few strings. Governments in the recipient countries must first make reforms, such as increasing sourcing from smallholder farmers, improving farmers’ access to seeds and fertilizers, and investing in processing, storage, and transport. Sponsors of the initiative hail it as a way of mobilizing large amounts of money and knowledge to strengthen weak value chains.

Some advocates for smallholder farmers have sounded notes of cautious optimism. “Investments in the New Alliance are predominantly intended to include smallholder farmers in sourcing and production. The onus is on the initiative itself and other key stakeholders to transform intentions into results, and to report those results in a transparent and accountable way,” stated ONE, a poverty advocacy group, in an evaluation of the program.

But critics of the New Alliance, including a group of African advocacy organizations, believe private sector partners will not live up to the initiative’s intentions. In response to this week’s G8 meeting, the arguments for and against this type of investment have heated up. 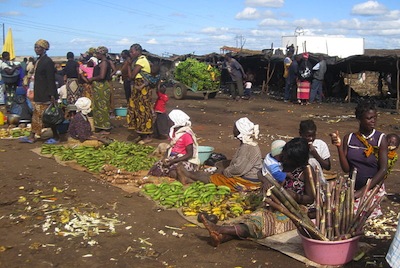 According to the UK Department of International Development, partner countries in Africa will gain access to private sector investment in agriculture through the New Alliance. In return, countries must modify their agricultural policies to strengthen seed quality, change land use laws, and raise farming standards. They argue that corporate investments will strengthen weak value chains through:

• Homegrown investment: The number of projects in the six original partner countries is heavily weighted toward African firms.

• Strengthening markets: Corporate investment in processing raw goods can be a vital tool to support farmers. Cargill is investing in processing starch and sweeteners from the locally grown cassava root in order to support Nigerian farmers as part of a New Alliance initiative.

“We are allowing our products to rot away because we are not processing them. Agriculture is not a development activity. It is a business, so we must add value to every single thing we produce,” said Akinwumi Adesina, Nigeria’s Minister for Agriculture and rural development, in the Financial Times.

The cons: Focusing on private investment will exclude poor farmers

According to critics, including advocates writing in The Guardian’s “Poverty Matters” blog, the New Alliance’s aim to engage the private sector benefits profit-seeking corporations at the expense of smallholder farmers. They have described the Alliance’s efforts as an opportunity for multinational corporations to secure markets and acquire land in Africa. They believe the policy reforms made by partner country governments in Africa would leave out small farmers who cannot afford to enter the formalized agricultural structure. They say farmers with small plots of land will be affected by:

In a statement that accused the G8 of “a new wave of colonialism,” advocacy groups writing under the name Civil Society in Africa said, “This is a skewed free trade, one that favors the ’formal sector’ of goods and services that have gone through approval and registration processes. Farmers and other producers of goods and services who cannot afford to enter the official approval system are marginalized, and trading of their products is rendered illegal.”

Global leaders have recognized the important role big business and private investment can play in improving agriculture and alleviating hunger. Now they must work to set up a framework that both includes the interests of the world’s 450 million smallholder farmers and ensures they can actually participate competitively in world markets.

Will the kind of private investment the New Alliance aims for be a boon for African agriculture, or a bust for poor farmers? Which side of the fence do you fall on? Share your views in the comments.

Editor’s note: This post was originally published on Global Envision, a blog focused on market-based solutions to poverty and managed by Mercy Corps, a NextBillion content partner.