Mentoring has gained prominence in Western business education in recent decades. Yet it is not a new discovery; business people have long traded ideas and advice, practicing informal mentorship in the street and the study, the public square and public house. Identifying the importance of one-on-one consultation, recent mentoring services have organized a previously organic process. Even with plentiful approaches to private sector professional development available – life coaching, consulting, executive coaching, training programs – proponents of mentoring proclaim its ability to catalyze personal development and create institutional change. But can mentoring also create broad economic impact?

Yes, say organizations serving the social enterprise sector. One is Mowgli Mentoring, the UK-headquartered nonprofit that supports entrepreneurs creating future jobs in the emerging economies of the Middle East and North Africa, a region whose 27 percent youth unemployment rate leads the globe. In fact, the MENA region will require 50-80 million jobs over the next 10 years just to maintain current unemployment levels. In light of such a pressing need and ongoing regional challenges, is mentoring really an effective path to lasting change? Mowgli’s story provides answers – and better questions.

Like many good ideas, Mowgli emerged from a season of soul-searching – and, yes, the guidance of mentors. Having founded 19 companies in the UK, Canada, Australia and the Middle East, Tony Bury began to reflect on what he had to offer the MENA region in response to its daunting unemployment levels, says his daughter and current Mowgli CEO Kathleen Bury. As he brainstormed the creation of Mowgli, Tony reviewed the importance of mentors in his life and noted the lack of mentoring opportunities that exist for enabling MENA entrepreneurs to get off the ground. He devoured The Fortune at the Bottom of the Pyramid and sought direct advice from the late C.K. Prahalad. He took stock of his skills as an entrepreneur and his personal values and passions. And he looked for convergences.

So, in 2008, Tony, together with his team, piloted the MENA region’s first mentoring program, in Jordan. Today, Mowgli has a network of more than 900 mentors and 750 entrepreneurs (mentees) serving Algeria, Egypt, Jordan, Lebanon, Libya, Morocco, Palestine, Qatar, Syria, Tunisia, Yemen and the UK. Its vision is to “support the sustainable development of societies through the mentoring and evolution of entrepreneurs and leaders.” This is both grand and simple: Mentoring invests in what Kathleen calls “the bank of human capital,” which pays societal dividends. Insofar as this is measurable, it works.

Complementary to executive training programs, which bestow technical skills and knowledge, says Kathleen, mentoring instills behavior and builds aptitude and attitudes within the entrepreneur. According to Mowgli’s approach, entrepreneurial mindsets, job creation and business development stem directly from leaders’ personal growth. Mowgli’s emphasis on the entrepreneur’s holistic growth shapes its definition of a mentor: “Someone who stands beside you in a shoulder-to-shoulder relationship and works with you to empower you to achieve your potential … as a listener, friend, mirror and objective sounding board.” At the same time, Mowgli defines mentoring as “having someone who tells you what you need to know, not necessarily what you want to hear.” In the Mowgli mindset, a good mentor does not steer the outcome of an entrepreneur’s decisions as much as provide alternative perspectives, ask the right questions at the right time, listen and notice what is said and not said.

This approach is not for everyone. It is a challenge to find participants willing to commit to Mowgli’s one-year mentoring process, set goals and take ownership for their own development. Similarly, mentorship requires high emotional intelligence and self-awareness, requiring highly interactive multi-day training before a mentor can be matched with an entrepreneur. 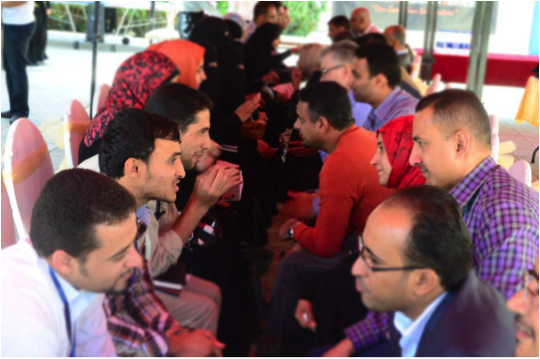 Another challenge, according to Kathleen Bury, is maintaining the “quality of mentoring at the heart of the entrepreneurial ecosystem” – staying true to a distinctively relational understanding of a mentor within a wider advisory service industry in which mentoring carries varied meanings. While a coaching relationship is usually contractual and transactional, Kathleen says, mentoring aims to empower the mentee in the context of a long-term, one-to-one relationship in which perspective, wisdom and trust is exchanged, but money is not.

(Although funding is necessary for entrepreneurs to participate in a year-long program, mentors receive no compensation; instead, they develop their mentoring and leadership skills and gain the satisfaction of supporting someone else in achieving their goals.)

Above: Entrepreneurs and mentors at the G8/Deauville Funded project (Forsa), Yemen 2014. The face-to-face aspect of mentoring, on which this region culturally thrives, defines Mowgli’s approach. (Photo: Mowgli Mentoring)

Alongside Mowgli, On Purpose, UnLtd and BITC – all UK-based – provide mentoring services specifically to social entrepreneurs. And while there are several mentoring providers within social enterprise, it is an underutilized approach in emerging markets. Referencing Mowgli, let me suggest what the mentoring model offers social enterprise widely:

1. It is grassroots and generative. Mentoring transmits entrepreneurial experience – a form of social capital, as well as seed for economic gain – person-to-person, not via institutional grand strategy. It builds on the resources of less-experienced entrepreneurs and those of mentors, which have been cultivated through time, experience and careful reflection. It prepares mentees to eventually pay that mentorship forward.

To borrow from botany, the mentoring model of business education is sporadic: Wisdom is widely dispersed, but when properly planted, multiplies in unpredictable ways. Where it takes root or how bountifully it produces is not ultimately knowable. But what mentors provide mentees certainly empowers them to build more successful and sustainable businesses, creates jobs and impacts people far beyond their reach. In other words, their generosity is generative.

2. It is holistic and human. Wisdom and experience are not the only goods shared through mentoring. It is also human accompaniment, one person meeting another in the field to discuss not only matters professional, but all of life that affects one’s development. (Because mentoring is human-to-human support, robots will never replace mentors.)

This holistic view of the person is especially critical for social entrepreneurs, a group who must navigate lives deeply integrated with their work. Says Kathleen: “What we believe is if you give hope, aspiration, confidence, motivation and empower the individual entrepreneur at his or her core, he or she will have a much greater chance of making their businesses grow and become sustainable and successful.”

3. It is contextual and concrete. Based on the belief that “the economic potential that is locked up in the entrepreneurial aspirations of the people far exceeds any money that nations/investors transfer to the (MENA) region,” Mowgli responds to a specific, local economic gap through serving the persons who generate job growth on the ground. This is why, for Mowgli, “entrepreneurship is being seen as the greatest potential game changer for the region.” This is a bold claim considering the potential political game changers in this region and their economic implications, but certainly in line with the Global Business School Network’s claim that SMEs (which Mowgli entrepreneurs run) create 78 percent of new jobs in emerging economies.

Because UK and MENA entrepreneurs alike take part, with relationships crossing national backgrounds and gender lines, mentoring has the potential to disrupt tired paradigms of development (e.g., problem-solution and North Atlantic-Global South). Will it? Time will tell.

4. It is low-cost and low-control. In a development sector where use of funds has been consistently and rightly scrutinized, mentoring enjoys enviably high returns (again, inasmuch as these are measurable) for relatively low cost. Compared to business education’s current scramble to procure pricey technology solutions, tables, notepads, café bills and conversation are low-tech and low-cost.

Mowgli’s work centers on making introductions, connections and setting solid foundations, the results of which cannot be managed or fully quantified. Beside initial trainings, there is structured and regular follow-up, alumni outreach and impact assessment conducted, but on the whole, analysis is simplified. This is not to say that mentoring organizations do not perform rigorous follow-up analysis for improvement (see Mowgli’s impact reports).

Mentoring entrepreneurs suggests that effective solutions can be both simple and human. By infusing an economy with the free exchange of human capital, mentoring encourages the gift to move – organically, person-to-person, in a sort of gift economy – generating and incubating new job creation opportunities where they start: with people. And although the job-creation need is great in emerging economies in MENA and beyond, we cannot fully foresee the long-term effects of organizations like Mowgli who daily connect and nurture entrepreneurs. In this, I submit, lies their promise.

If you are an entrepreneur or mentor, consider mentoring with Mowgli.

Nathan Rauh-Bieri is the Program Coordinator of Education at the William Davidson Institute at the University of Michigan.

Note: WDI is the parent organization of NextBillion.