It’s true, as reported by Wood Mackenzie and Energy 4 Impact, that 2018 was a fairly positive year for investments in the off-grid solar sector. But according to our own analysis at GOGLA, this progress isn’t enough.

As the voice of the off-grid solar energy industry, representing more than 150 off-grid solar companies and stakeholders, GOGLA closely monitors investment flows in the sector. Based on what we’ve seen, it’s becoming clear that to reach the target of universal energy by 2030, the sector needs a significant increase in grant, equity and debt funding.

Our analysis is based on the GOGLA deal database, which captures investment trends over the period 2012 – 2018. Part of our data collection work involves making market intelligence available to inform the sector about key developments it should not miss. To that end, we’d like to share the top five trends in off-grid solar funding we’ve observed in this recent data.

In general, 2018 was a positive year for funding in the off-grid solar sector, with fundraising exceeding the previous record year of 2016. After seeing a slight dip in investments in 2017, the sector attracted a total of US $352 million last year – 20% more than in 2017. Not only has the total amount invested in the sector increased, but there has also been an increase in the number of transactions: 2018 saw 170 transactions, nearly three times as many as 2017, mostly driven by crowdfunding rounds. What’s more, the concentration of transactions decreased slightly: The top 10 fund recipients attracted 77% of the total funding in 2018, compared to an average of 83% in 2012-2018.

Among GOGLA members, many companies reported a need for additional investments to help the sector grow further. That’s in line with findings from our 2018 Off-Grid Solar Market Trends Report, showing the sector needs funding of up to US $5.7 billion until 2022 to sustain its current growth rate. But the current growth rate in investment falls short of meeting this target. To further accelerate the market, a substantial increase in grants, equity and debt is still needed. 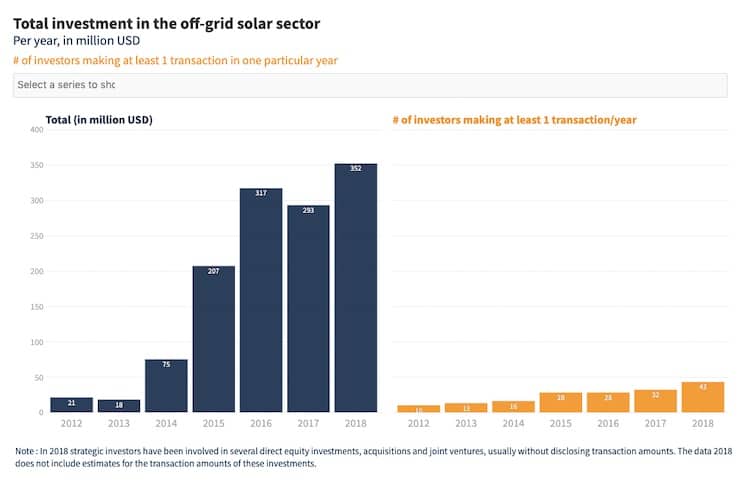 Last year witnessed a growth in debt investments, mainly driven by development finance institutions (DFIs). However, equity investments were stable in comparison to 2017. While the number of investors with at least one investment into the sector grew (about 34% more players in 2018 than in 2017, as seen in the chart above), GOGLA members are still facing a number of challenges in securing investment. Although debt investments are easier to acquire than in earlier years, younger and smaller companies still report difficulties in meeting their working capital funding requirements. And equity and grant funding are in short supply, especially for more recently founded companies. While grant funding is essential for product and business model innovation, as well as for entering new markets, we continue to observe a downward trend for grants.

Aggregated debt funding to the sector amounted to US $225 million in 2018 – the highest level since our recordings started in 2012. The pioneering providers of specialized intermediary debt finance have been joined by crowdfunding platforms and DFIs, and this is unleashing significant amounts of debt funding for inventory finance, working capital and (re-) financing of receivables. However, there is no sign of growing involvement of local banks in funding the sector, although arguably public disclosures on this type of transactions may be less common. Barriers to their investment in off-grid solar include information gaps and industry challenges, such as the overall immaturity and perceived risk of the sector.

Crowdfunding, on the other hand, represents a new player in the space that has apparently come to stay. Initially addressing smaller companies, crowdfunding platforms are now raising millions of dollars in debt funding for single off-grid solar clients. By blending investment from their customer base with public money (guarantees and matching funds), crowdfunders are able to offer much-needed smaller ticket sizes at more flexible conditions. The arrival of crowdfunding has had an effect on the sector: Companies report that the option to choose between various lenders increases the flexibility of lending conditions, enhances general efficiency and supports better mission alignment with their debt funders.

We certainly see a more vibrant and dynamic market for debt funding. However, it is yet to be seen how this expansion of the debt funder ecosystem will influence the overall investment landscape in the longer term. While some large debt funding initiatives that were announced in prior years have not hit the market yet, there are some concerns that too much debt might already be available right now. This could lead to leverage ratios rising too fast. And with growing competition, interest rates on debt might fall further. While in itself a very positive development, this increase in debt funding potentially also bears the risk of crowding out commercial lenders, or delaying the entrance of these lenders into the market. Commercial capital, however, will have to play a key role in hitting the US $5.7 billion target needed to sustain the growth of the industry until 2022.

Since GOGLA has been tracking these investments, East Africa has been the primary focus of investments into the sector. In 2018, however, it became clear that this is changing: While East Africa continues to hold its position as the recipient of the largest amount of investments, it has received the lowest absolute amounts of investment since 2012. Companies and investors are now increasingly seeing the growth potential of West Africa. Meanwhile, investments into other regions across the globe (South Asia and Latin America) have been rather stable.

To reach universal electrification by 2030, the sector needs to continue growing stronger and faster. The investment trends of 2018 bring to light the need for more early-stage funding – to help start-ups and smaller companies access the capital they need, to enable markets to develop in other regions, and to attract more investors. But the focus can’t shift entirely to start-ups: It is also evident that we need to keep the more mature companies well-capitalized so they can continue their growth path. It’s particularly apparent that local currency lending needs to increase, and the downward trend on grants needs to be urgently reversed.

In short, though our data shows strong and growing momentum in terms of funding, there is still significant room for improvement – especially if the sector hopes to reach the target of universal energy by 2030.

Johanna Galan is the Director of Policy and Juliana Martinez is a program assistant at GOGLA, the global association for the off-grid solar energy industry. Dieter Poortman is an independent impact investing consultant.