Why does this gap exist? There are three key reasons:

CEGA and the Global Networks Initiative

The Center for Effective Global Action (CEGA) based at the University of California, Berkeley, is committed to narrowing this research gap in the growing field of development economics. Through impact evaluation trainings, matchmaking events and relevant funding opportunities, CEGA’s Global Networks initiative helps to increase the volume of high-quality academic research produced by scholars from LMICs and consumed by policymakers in target countries.

CEGA’s East Africa Social Science Translation Collaborative (EASST) trains researchers from LMICs through semester-long fellowships at UC Berkeley. Fellows audit courses, network with and receive mentorship from UC Berkeley faculty and Ph.D. students, develop research designs, and present their ideas for feedback in seminars. Upon returning to their home countries, EASST multiplies its investments in fellows by offering research funding, access to training grants, and policy grants to support engagement with decision makers and partners in the region. 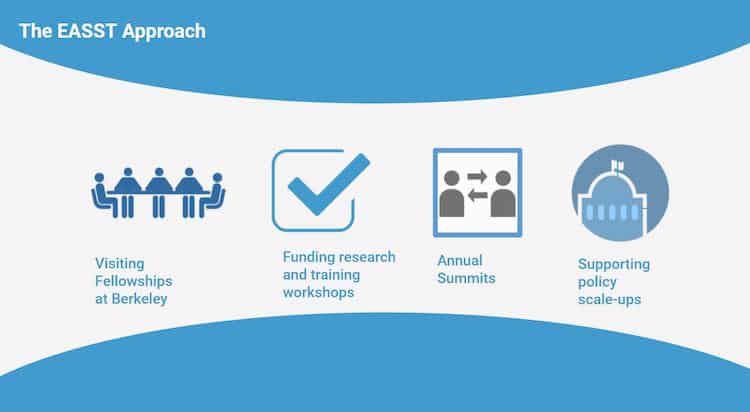 In five years of EASST, 20 visiting fellows have gone on to train over 850 additional East African researchers in their home countries. EASST also has funded 14 full research studies, provided access to research transparency trainings for 10 fellows through the Berkeley Initiative for Transparency in the Social Sciences (BITSS), and awarded two fellows Policy and Partnerships grants to engage in scale-up activities with CEGA’s partners and government ministries, including the Ministry of Education in Uganda.

Over 500 researchers have attended six Annual Evidence Summits, where EASST scholars, as well as their African colleagues and CEGA affiliates, have an opportunity to present and discuss their research with the broader research community and policymakers in East Africa. The most recent summit was held in July in Addis Ababa, Ethiopia. The summits not only allow for the dissemination of research findings, but for crucial south-south networking between EASST fellows and the East African research and policy communities. 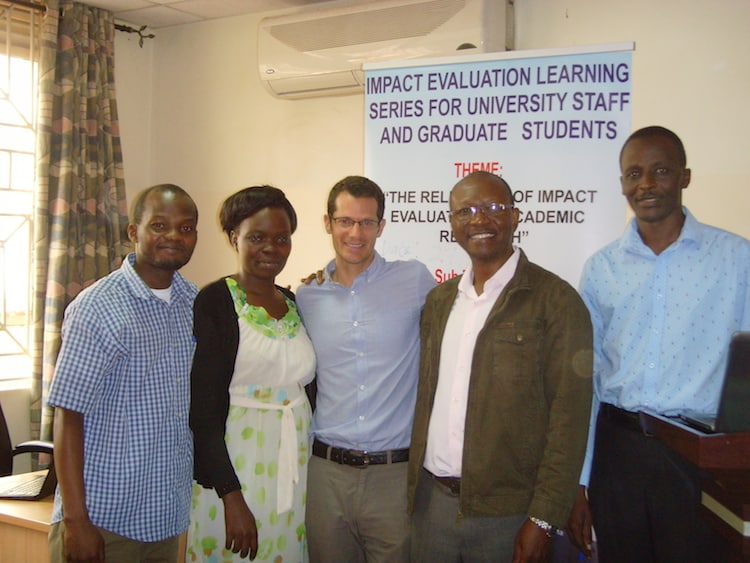 EASST research has spanned numerous sectors, including health, education, labour and agriculture. One example is the work of Annet Adong and CEGA affiliate David Levine, who collaborated on an evaluation of ways to increase the uptake of inorganic fertiliser by smallholder farmers in Uganda. Despite the fact that inorganic fertiliser is known definitively to increase crop yields, low demand among farmers means low (or no) positive impact on crop yields. Adong and Levine theorized that offering risk-free samples of the fertiliser would increase its ultimate usage, and set out to test this theory through a randomized control trial.

Indeed, the researchers found that farmers who were offered free samples of the fertilizer were 66 percent more likely to buy it than those who were presented with a traditional sales offer. However, Adong and Levine’s research further revealed that liquidity constraints, concerns about weather variability, and delayed returns on investment prevented the treatment group from using the fertiliser beyond the first season. These findings suggest that formal savings groups and weather insurance products may be essential to bolstering fertiliser use over time.

This research illustrates how the EASST fellowship resulted in a successful research collaboration between a CEGA affiliate and an East African researcher, a process we hope other universities and African researchers can emulate.

In addition to EASST, CEGA’s Global Networks initiative recently kick-started its BRAC-CEGA Learning Collaborative (BCLC) with generous funding from the International Development Research Centre. The BCLC follows a similar model of capacity building through visiting fellowships, matchmaking and research funding—all toward a goal of increasing the quality and quantity of evidence produced by BRAC researchers.

Through these and other programs, CEGA is pushing research conducted in developing countries to be more inclusive, relevant, rigorous and—ultimately—more impactful.

Maya Ranganath is the program manager for the Global Networks Initiative for CEGA.