Why don’t great ideas that are useful and working effectively to solve some of the most pressing social challenges “travel” as well as business ideas do? Why aren’t they able to scale to solve similar social challenges happening in other parts of the world? What is preventing our Ashoka Fellows from scaling their work better and faster? With these questions in mind, in 2009 we launched the Ashoka Globalizer Program to find the answers and potential solutions.

The first thing we quickly understood is that scaling social ideas didn’t follow the “market incentives and mechanisms” that business ideas do. When you scale a business idea, the potential of bigger monetary gains offsets the problems and risks. However, when scaling a social idea, what you get is typically larger challenges and problems (more funding is needed, more people to support and help, etc).

The other thing that we soon realized is that the citizen sector was extrapolating the experiences and lessons learned from the business sector, which, as explained above, has very different market forces. We studied many frustrated attempts to scale social programs and concluded that on many occasions this failure could be traced to the over-reliance on the conventional wisdom of the business sector, in which “scaling up” typically focuses on increasing the size of an organization.

It became very clear to all of us that we needed to explore this idea of scaling social impact without necessarily increasing the size of the organization behind it. An organization doesn’t have more impact the bigger it becomes, in fact, it’s quite the opposite … and this became our mantra and our working hypothesis. We soon found out that other academics had arrived to the same conclusion. Indeed, as Jeffrey Bradach, co-founder and managing partner of the Bridgespan Group, wrote : “Finding ways to scale impact without scaling the size of an organization is the new frontier for work in our field.”

Here are two mini-case studies that illustrate what we mean:

When Valid Nutrition tried to scale…

Dr. Steve Collins, the founder of Valid Nutrition, is one such social entrepreneur who has been frustrated by attempts to adapt traditional business models for scaling his impact. Several years ago, Collins revolutionized the treatment of severe acute malnutrition by developing a new method involving individual portions of “ready to use therapeutic food” administered directly by community members. This approach eliminated long trips to overcrowded inpatient treatment centers, reduced contamination risks, and ultimately cut death rates five-fold while dramatically increasing coverage. Based on these results, and the knowledge that demand for treatment still far outstrips supply, the managers of Valid Nutrition felt a burning obligation to extend the impact of its work as widely as possible. Making use of the corporate expansion model prevalent in this industry, and eager to maintain tight control over quality, the business built a factory, hired a distribution team, and established an entire supply chain under direct Valid Nutrition management. Very quickly, however, this approach encountered problems: Revenue growth did not keep pace with costs and the task of directly managing so many processes overwhelmed Valid Nutrition’s core team. Furthermore, Collins’s team was frustrated that their highly centralized organizational model failed to adequately promote local economic autonomy and empowerment – a core value of their community-based care ideal. Collins had bumped into one of the central difficulties in scaling social impact: As you serve increasing numbers, the complexity of your work increases faster than your organization’s ability to manage it.

Valid Nutrition is certainly not the only social organization to have been stymied by attempts to scale impact by growing the organization. Indeed, a consensus is emerging: Social entrepreneurs who wish to effectively “scale up” must learn to transition “from an enterprise to an ecosystem.”

This transition entails isolating the key values at the absolute core of his mission and actively seeking out other actors who could integrate these values into their own activities.

Scaling Streetfootballworld by unleashing a network

Juergen Griesbeck, the founder of Streetfootballworld, has undergone a similar shift in focus during his scaling journey. Juergen’s vision is to connect all organizations around the world using football (soccer) as a tool for development. Through these connections, organizations refine and supplement their programming with the best practices of others, collaborate on shared projects, and tap into investors they could not access individually. Originally, Streetfootballworld set out to function as the central connecting point facilitating all major activity among all members of its network. However, this meant it had to grow in size along with the network’s growth, which seemed unrelated to the impact it wanted to have. So Griesbeck decided to decouple the size of the network from the size of its core by empowering network members to transact and collaborate directly amongst themselves. He has since shifted focus to pioneering new ways for network members to cultivate their own local ecosystems, learn directly from each other, and jointly pursue shared funding and program goals. Today, Griesbeck is adamant: “This network approach is part of the impact.” 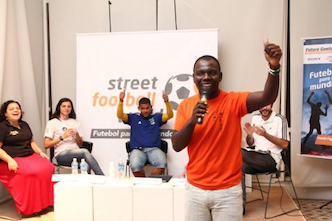 Thankfully for Collins, Griesbeck and the growing ranks of social entrepreneurs wishing to scale their impact without necessarily growing their organizations, a robust body of scholarly work has begun to emerge around models and strategies to accomplish this. Indeed, from Greg Dees’ early elaboration of the multiple “pathways to scale” beyond simple branching and franchises, to Bradach’s recent call for creating “100x the results with 2x the organization,” there has been significant progress. Yet, Ashoka Fellows have been calling for scaling guidance with a more directly problem-solving orientation, and to learn firsthand from the struggles and triumphs of their peers who have already walked the path.

Supporting scaling through the Ashoka Globalizer

In the process of bringing these social entrepreneurs together and pushing them forward, we have developed a few practical insights.

Through the Globalizer Summits and a host of global conversations, the central tenet of scaling for impact has been clear: Let loose a well-defined idea to create a movement or mission-aligned ecosystem, rather than only growing the organization behind it. Two strategic imperatives have shone through: Liberate the core and become a magnet.

To really help an idea travel, social entrepreneurs must return to the essence of why they started their work. Too often their organizations have grown opportunistically – expanding and evolving based on funding or connections available at a given time, rather than with a clear focus on their original mission and full market potential. As one Globalizer participant put it, “I started the organization to work on a problem. Somewhere along the line, building the organization became larger than the mission. This was hard to get out from (under).”

The Globalizer Initiative at a Glance

Launched in 2009, with financial support from the Essl Social Prize. Functions as a cross-sector, tightly-knit community of practice, involving (to date):

As the Globalizer community explored mechanisms to extend social impact beyond the organization, two approaches stood out. These are not new pathways per se but ones where the key principles needed for adoption and widespread use have not yet been developed adequately. They are:

We believe that both pathways have the potential to strongly impact the way social entrepreneurs scale up in the future.

1) Open Source Changemaking. In a world of constant change and multiplying problems, both working behind closed doors as well as leadership by one indispensable individual are becoming relics of the past. We must open up opportunities to increasing numbers of people to collaborate together for a common purpose – the heart of all social changemaking. The open source model is a powerful way to do this because it taps into people’s natural motivation.

A great example of this approach can be found in the well-known story of Ashoka Fellow Darrell Hammond’s KaBOOM! – the organization that builds playgrounds in low-income communities across the United States with the goal of giving every child a safe space to play within walking distance of their home. When KaBOOM! made the decision to open-source its playground model, it found that in a single year (2009), other people built as many playgrounds as KaBOOM! itself had built in the previous 14 years. Indeed, today “local communities build 10 KaBOOM!-influenced playgrounds for each one KaBOOM! builds itself.“

2) Smart Networks. Leveraging or collaborating across networks in ways that are greater than the sum of their parts, can help us achieve the scale we need. The 21st century will be marked by integrated thinking, interdependent action and international systems change. In a world where it is neither feasible (nor even, perhaps, desirable) for a single person, organization or group to achieve large-scale complex social change alone, what will be required is tapping the power of interconnecting networks to accomplish lasting results.

Smart Networks require generous sharing to provide value to others, which makes these networks powerful, cost-effective tools to increase access to information, financing and other resources. For instance, Kovin Naidoo, a Globalizer Fellow from South Africa, spent a large amount of time and organizational energy leading a coalition that was instrumental in sealing a very large grant for substantial work across South Africa. But his organization, the International Centre for Eyecare Education, didn’t receive any of the funds. However, other members of the coalition later approached him to carry out significant aspects of the work, and the centre ended up benefitting more than if it had been one of the initial grantees.

Given the nascence of attention to both open source changemaking and smart networking as key pathways to scaling social impact, it’s not hard to foresee a raft of impending challenges. For instance, how do social entrepreneurs learn to emotionally let go of their program to the extent that others can truly take it in new and unforeseen directions? How can they operate effectively in a world conditioned to pursue isolated impact, often driven by isolated investing from a donor community that does not yet recognize that large-scale success will only come from collaboration? And if success doesn’t conform to our standard modes of measurement and resource allocation, how will organizations justify spending resources on these new pathways? These are the types of challenges all innovators are facing and, thus, what the next series of scaling innovations will most likely address.

It is not going to be an easy change. But social entrepreneurs have always been characterized by the ability to see over the horizon, to envision a new possibility such as the fact that poor people might be willing and able to pay back micro-loans. So if anyone can lead this type of change, it is the likes of Collins and Griesbeck and the dozens of other social entrepreneurs who have seen beyond the horizon and are quietly shaping new pathways to scale their vision. And, in doing so, they are ensuring that the best ideas reach their full potential: solving intractable social problems and improving countless lives around the world.

This article was originally posted on the Practitioner Hub for Inclusive Business as a part of a mini-series on scaling inclusive business. Click through to join the conversation and for articles, toolkits and advice from experts and practitioners.

The author thanks Jon McPhedran Waitzer and Roshan Paul for significant contributions to this post.

Maria Zapata is the co- founder of the Ashoka Globalizer Program.