Bringing Cooking Poverty off the SDG Sidelines: A New Study Takes a Fresh Look at the Clean Cooking Challenge

Energy access professionals know a lot about dirty cooking and cooking poverty – i.e., the use of wood, charcoal, dung or other solid fuels to cook on three-stone or low-quality stoves in poorly ventilated conditions. They know the problem negatively affects almost four billion people and kills over 4 million each year – more people than tuberculosis, malaria and HIV-AIDS combined. They know that this damage primarily impacts women and girls, who are generally responsible for meal preparation in emerging countries. They know the root causes of cooking poverty: patriarchy and discrimination, overall poverty, dependency on available fuels, and lack of choice.

But though energy access professionals are well-aware of the impacts of cooking poverty, the problem and its solutions are pretty much invisible to the world at large – and even, to a lesser extent, to the broader development sector. Groundbreaking work published by the Energy Sector Management Assistance Program in 2020 showed that the cost of inaction ($2.4 trillion each year) is exponentially higher than the estimated one-time cost of eliminating dirty cooking – which ranges from $10 billion a year over the course of a decade (if the goal is to reach improved cooking for all) to as much as $156 billion a year (if the goal is to achieve modern cooking for all). Even $156 billion per year would be a fraction of the annual cost of fossil fuel subsidies, yet the international community invests only around $131 million per year – which amounts to 3.4 cents per capita.

This lack of attention, awareness and urgency around cooking poverty threatens to turn the entire Sustainable Development Goal edifice into an SDG artifice, making it impossible to achieve Goals 1 and 2 (Poverty and Hunger), Goal 5 (Gender Equality), and of course Goal 7 (Sustainable Energy). Failure to eradicate cooking poverty also greatly reduces our ability to accomplish five other SDGs.

It’s time for us to bring clean cooking off the sidelines of the development sector, which has long relegated it to a lower position than electrification, decarbonization and energy efficiency on the SDG agenda. Cooking poverty remains one of the largest unsolved public health and equality crises humanity has ever experienced. Below, I’ll explore why previous (and ongoing) efforts to address this crisis have failed and outline some potential solutions that could finally turn things around, based on a recent study out of Columbia University.

Between January and June of this year, a team of seven graduate students at Columbia University’s Sustainable Management Program set out to analyze this issue from a more comprehensive perspective. They conducted this assessment while a major “ecosystem strategy” exploration was underway at the Clean Cooking Alliance (CCA), which was working with the consultancy Dalberg to determine how the sector could overcome a longstanding lack of progress toward ending cooking poverty. Based on the advice of the Clean Cooking Alliance, the team did this independently of the CCA/Dalberg work, so that their findings could be stacked up against each other. (For more on the CCA/Dalberg strategy, read my analysis in an article published on NextBillion shortly after its release.)

The result was a damning diagnosis of the clean cooking sector, consistent with the insights the CCA/Dalberg published as part of their ecosystem strategy – and a promising but challenging set of recommendations. The students titled their study “Killed by Breathing,” drawing upon a quote in a 2016 report from the World Health Organization, stating that “…women and children are killed by the everyday act of breathing, in what should be the ‘safety’ of their own homes.”

The study built upon a set of insights that the CCA and Dalberg compiled in the early stage of their ecosystem strategy work. These insights highlighted the following challenges:

These insights provided a foundation for the study’s own outreach to clean cooking participants, advancing the hard work of trying to conduct a sector-wide analysis of this diverse system.

From these and other observations, the student-researchers created their own generalized model of the value chain or system that drives the clean cooking sector. And, more importantly, they identified significant gaps in this system.

Their generalized model sees the system as a set of primary and support activities, leading to the all-important goal of delivering improved or modern cooking to end-users, as illustrated in the graphic below. 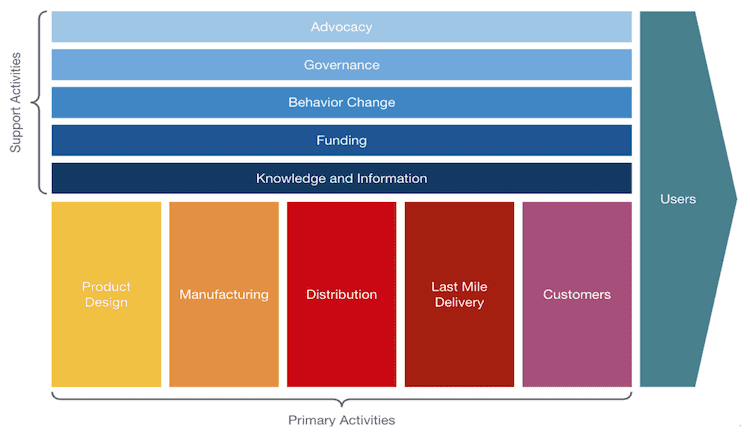 The student-researchers then explored the gaps they’d identified in just the support activities (they very reasonably set aside the task of describing the entire universe of primary actors and activities). They summarized these observed gaps as follows:

Finally, the student-researchers assembled and circulated a 50-page draft report to all of their advisors (full disclosure: I was one), and to a diverse set of industry colleagues. In their draft they included a roster of solution sets. These recommendations included:

The study team then translated this work into a series of five action items published by Sustainable Energy For All. The hope is that the team’s thinking will be integrated into the ongoing ecosystem strategy work of the Clean Cooking Alliance, Dalberg and others. Many of the team’s observations and recommendations line up well with that body of work, but some of its points and implications require more back-and-forth.

The end result remains to be seen, but this study already illustrates two promising things: First, it shows that the learning curve in clean cooking can be overcome with moderate effort in a reasonable period of time, as evidenced by the student-researchers’ success in adding their voices to the cooking poverty conversation. And it demonstrates that the debate about the scale of strategy, tactics and solutions remains an important and ongoing one in the sector.