Editor’s note: This post is part of the NextBillion Series “New Frontiers in Renewable Energy” that explores the dynamic changes reshaping the sector.

Since 2010, the number of people without energy access has decreased from almost 1.2 billion to 840 million. The “glass half full” perspective on those numbers is that some 360 million people now have access to the benefits of electricity. The downside is that, with SDG7’s finish line for universal electrification now just 10 years away, this modest rate of progress is not bringing us quickly enough toward the goal. Furthermore, even among connected customers, a basic, subsistence level of electricity consumption (30 kilowatt-hours per month) was unaffordable for 40% of households in about half of access-deficit countries. This suggests that increasing the number of connections may not be synonymous with boosting energy access – and may not imply progress toward other elements of sustainable development, for which energy consumption is considered an important ingredient.

In light of these numbers, and the ticking clock, it’s clear that the energy access sector needs to continue to iterate on its approach.

From Solar Home Systems to Mini-grids

Looking back a decade, many solar home system (SHS) and financing companies were just beginning to tackle the problem of energy access with fierce commercial sensibility. In 2015, investment really started pouring in, and – for the first time in history – there was a viable alternative to grid extension for rural or low-density populations.

Factor[e] Ventures was founded in the midst of this heavy investment into small (10-100 watt) stand-alone solar systems, and the connection between electricity consumption and the human development index was – and still is – a guiding principal for our energy investments. But with this focus on development results, our energy access thesis has come to focus on mini-grids, which provide some key advantages over existing alternatives like grid-extension and SHS.

Mini-grids offer a reliable yet affordable energy connection that can be deployed faster than – or in concert with – grid extension, and they offer more meaningful amounts of electricity than SHSs. Solar home systems work well for Tier 1-2 access (very low power for basic household energy needs), but they lack interoperability with commonplace and affordable AC appliances. SHSs often power consumptive appliances (e.g., lights, fans and radios) rather than productive, income-generating appliances (e.g., grain mills, water pumps, welders and cold storage for agricultural produce). Furthermore, they may become redundant when a mini-grid or grid show up.

In contrast, AC mini-grids enable people to move beyond consumptive appliances to income-generating appliances. And there is a strong economic value proposition for approaches, like mini-grids, that allow users to share power generation and storage assets. Through an in-depth modeling exercise, we’ve found that if just 10 stand-alone solar home systems with similar but not identical load profiles (i.e.: daily energy use patterns) are connected to each other for the purpose of sharing energy, the hours of “blackout” (i.e.: hours when the SHS’s battery is depleted and unable to provide power) could be reduced by 16%. Expressed a different way: The generation and storage capacity of solar home systems could be reduced by 16% to serve roughly the same amount of load. This meaningful savings on solar panel and battery expenses reduces the cost of delivering electricity for the end user.

Figure 2. An analysis of interconnected SHS created by Factor[e] and the Energy Institute at Colorado State University. The white shaded areas indicate where excess electricity can be shared with peers instead of wasted.

The case for interconnected systems is supported by others in the sector, especially where the density of proposed connections is greater than 150 people per square mile. EDF Energy is running a pilot program in which urban customers buy into a community solar array, which allows them to trade energy with each other to cover their varying needs: Based on simulations, the program could offer 12-30% customer savings when it’s fully implemented. Similarly, ME SOLshare has seen the interconnection of SHSs increase their utilization of existing generation capacity by up to 30%. Whether the generation is distributed around the mini-grid (as in the case of ME SOLshare) or in a more centralized location, the benefit of aggregating customers is clear.

Building a Market for Mini-grids

While the economics for emerging market mini-grids are promising, we realized it couldn’t happen without the right technology providers. And when Factor[e] mapped the global mini-grid ecosystem, we found large gaps in the technologies needed to make mini-grids possible and profitable. Where there were already affordable solutions (e.g., IT ticketing), we avoided duplicating efforts. Where the value chain lacked a market-appropriate solution (e.g., a financing marketplace where mini-grid developers could submit their projects to funders), we incubated or invested. The image below illustrates a simplified value chain and the investments we’ve made at each level. 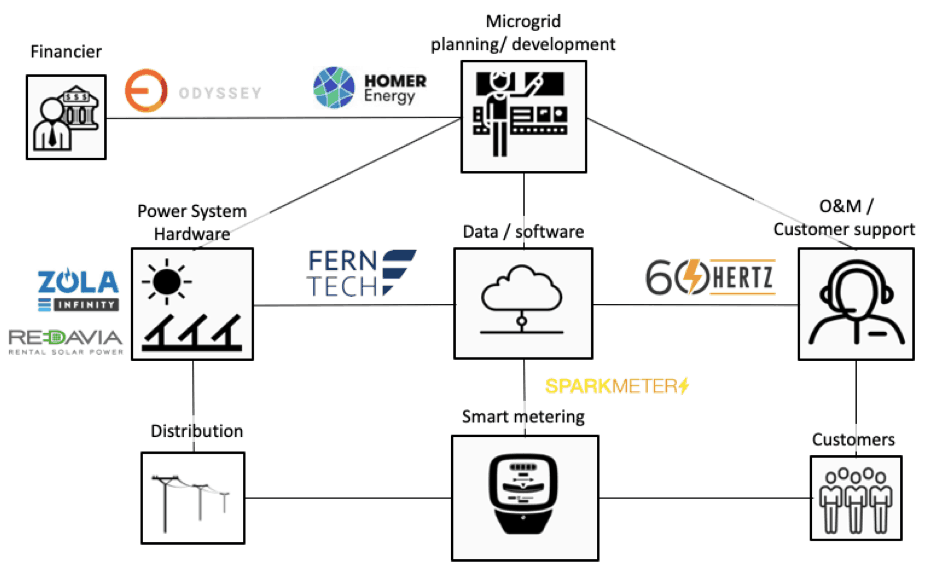 Given the enabling nature of these technologies, it was clear that in some cases we’d be investing in “market-makers” – i.e.: companies that lay the groundwork for a new market to develop. This strategy intends to accelerate the market and yield venture-like returns by achieving scale across multiple geographies and developers. Investing ahead of the market is inherently risky business, and it hasn’t been an easy road. Our companies face a first-mover disadvantage – especially where supply chains need to be built and the value proposition has to be proven for the first time. We’ve engaged deeply with our portfolio companies as they “do too much” to introduce advanced technology to a nascent market.

We believe these companies are enabling energy access mini-grids to be smarter and more profitable. Several years ago, pilot mini-grids helped establish proof-of-concept, but were far from optimized. They were built with off-the-shelf hardware from the marine or large residential sector. These pilot grids haven’t yielded the kinds of profits that are needed to attract commercial capital, but they generated important learnings. Hence, the sector hasn’t hit the “tipping point” in terms of internal rate of return (IRR), but at least we have a formula for how to reach it.

For the sector to truly scale, mini-grids must meet commercial IRR expectations through greater revenues and decreased costs. The illustration below shows the forces at play. For example, a mini-grid with a $750 cost per connection can achieve about 15% IRR as long as it serves customers with an average revenue per user (ARPU) of about $10 per month. As a mini-grid’s capital expenditure decreases, it can achieve profitability with lower ARPUs. Initiatives that provide demand stimulation, systematic subsidy, or reduced operations and maintenance costs can also raise IRRs. However, the climate in which mini-grids are deployed can raise or lower the bar for what’s considered a favorable investment. For instance, higher returns may be desired where foreign exchange is a concern, whereas favorable government policies can lower deployment risk. 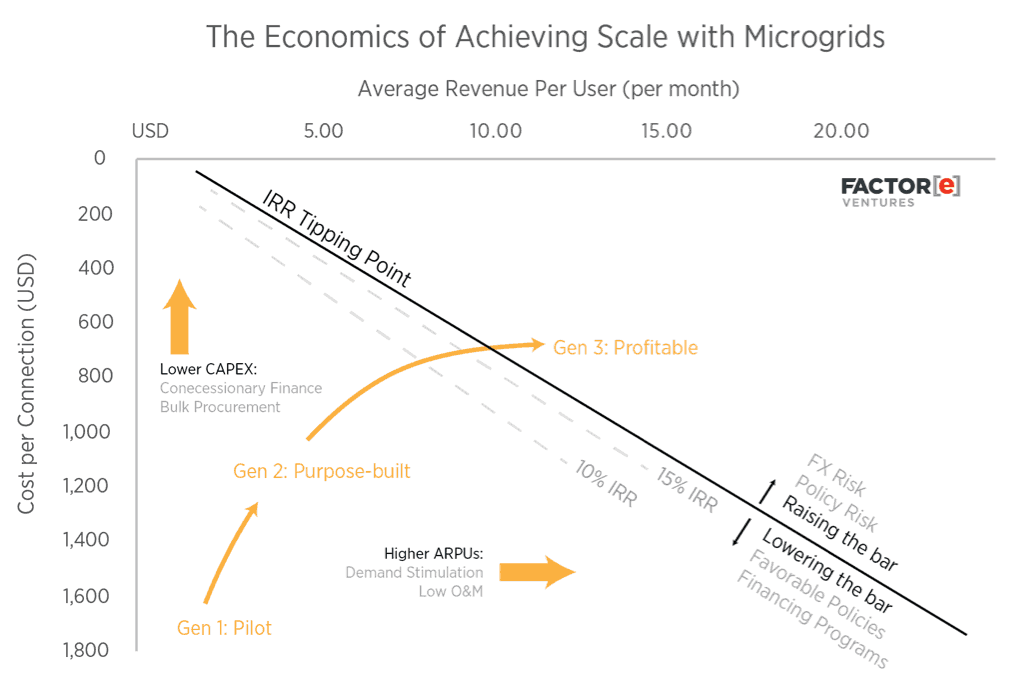 To move toward IRRs that will attract commercial investors, mini-grids must evolve from their early days of repurposed hardware and inexperienced developers to a future defined by optimized technology and excellent operators. The sector is arguably in the transition zone today, as energy access mini-grids are increasingly purpose-built and profitable.

After five years of investing in mini-grid technology, we have some early indication of the effect of these investments. Some of Factor[e]’s investees illustrate this impact:

Though the energy access sector has changed dramatically over the years, we still believe that economic development and poverty alleviation can be achieved by moving customers beyond subsistence consumption and empowering them to climb the energy ladder. And we’ll continue to seek out innovative approaches and enterprises that are advancing those goals. Recently, the sector’s growing interest in electricity for income-generating activities drove our research on the characteristics of productive appliances for mini-grids, and this interest is shaping the next iteration of our energy investment thesis.

But however our approach evolves, it will remain focused on the nexus of sustainable energy consumption and human development. As we work to help the world move toward universal energy access in the coming decade, we’re looking for companies that enable reliable, renewable and affordable electricity for developing communities – ranging from small or rural commercial customers, to large and peri-urban industrial facilities. If you have a business we should know about, contact us at info@factore.com.

Amanda DelCore is an Associate at Factor[e] Ventures.