Editor’s Note: This article was voted by readers as one of NextBillion’s Most Influential Articles of 2019.

Over 600 million Africans are living without electricity today. We have previously shown that mini-grids are the cheapest technical solution to bring power to at least 100 million of these people. However, their business model is not yet sustainable. One fundamental challenge is that rural customers’ energy consumption is extremely low. If customers don’t use sufficient electricity, there is not enough revenue for mini-grid developers to sustainably operate their grids.

Mini-grid customers’ electricity consumption is limited both by how much they can afford, and what they can do with the electricity. For example, regardless of their available budget to spend on electricity, a customer who owns a single 5W LED lightbulb can only use mini-grid electricity for lighting. This means they can consume no more than about one kilowatt hour per month, even if they run it for six hours a night, every night. This is problematic for both the customer and mini-grid developer. The customer is missing out on the full benefits of electricity, while their low consumption makes it unprofitable for a mini-grid to serve them.

The Mini-Grid Innovation Lab, established by CrossBoundary Advisory and The Rockefeller Foundation in 2018, and supported by Energy4Impact, works with mini-grid developers to identify and test innovative prototypes that improve the business model. As the prototypes generate results, the Lab shares evidence on their impact, and works closely with partners – developers, governments and funders – to scale these prototypes across participating developers and markets.

As part of these efforts, the Lab is running a prototype to help developers test whether appliance financing can increase consumption, and therefore profitably drive revenue and improve the business model. In this article, we discuss the findings from this prototype to date.

Exploring the Impact of Appliance Financing

In 2018, the Lab helped seven mini-grid developers to sell 663 appliances on credit across 25 sites in East Africa and Nigeria – the largest trial of appliance financing on mini-grids in Africa to date. We offered financed appliances including speakers, TVs, fans, satellite decoders, rice cookers, blenders, irons and other small household appliances.

Early results suggest that rural mini-grid customers are constrained in their power usage. They are able and ready to consume more electricity, but don’t have the means to put this electricity to use. This can be seen in the fact that appliance purchasers in both regions consumed nearly twice as much electricity for the first five months following appliance delivery. Speakers and TVs drove the greatest increase in site-wide consumption (aggregated across all customers at a single site) and average revenue per user, due to their outsized popularity. 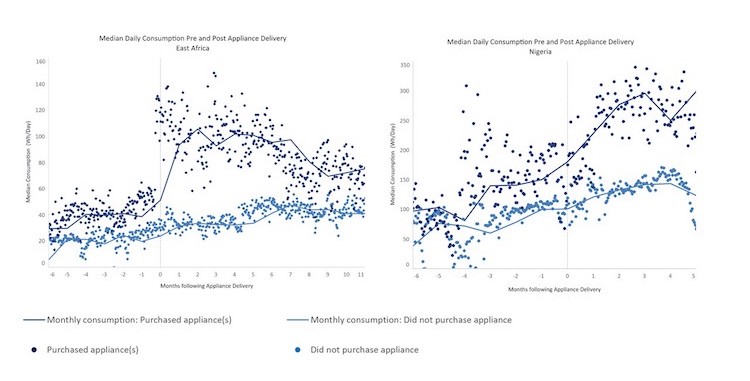 This growth in consumption suggests that mini-grid developers can raise revenues by implementing appliance financing schemes. Average revenue per user across all customers also saw significant increases sustained over time. In East Africa, revenues are 18% above baseline levels after 11 months; in Nigeria, that number is 25% after five months.

Increasing revenue, however, is only half the equation. For appliance financing to be a worthwhile innovation for the mini-grid business model, the program must be profitable. Greater consumption incurs costs in increased generation and storage. Those costs grow when the additional consumption occurs during evening hours, when solar energy is not being generated, and expensive batteries are required to store solar energy generated during the day and supply power at night. Additional consumption during the day requires just solar: This means that shifting consumption to daytime hours is the most promising way to improve profitability. 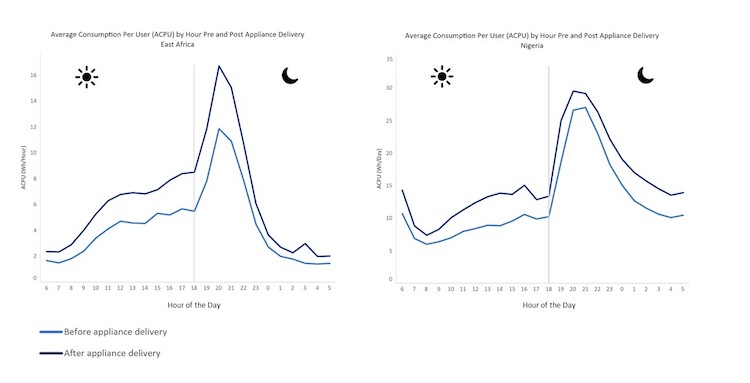 Additionally, procuring and distributing appliances and tracking loan repayments are operationally complex processes, and require significant developer resources. Developers often don’t have staff time to spare, or the proper technology or tools to manage these additional processes. For remote mini-grids, it’s difficult for developers to follow up with customers in person to collect loan repayments or repossess appliances in the case of default. These processes all incur cost.

Iterating and Improving on the Appliance Financing Solution

In line with the Lab’s rapid and iterative testing approach, we’re already launching iterations of the appliance financing prototype to test solutions to these issues. To further shift consumption to daytime hours, we are testing the impact of offering “daytime” productive use appliances such as grain mills, but on longer payment terms of 18 months to ensure the monthly instalments remain feasible for customers. And to alleviate the administrative burden on developers, we are testing the impact of partnering with the payment platform Angaza to manage customers’ loan repayments.

It’s important to emphasize that this initial data represents actionable intelligence rather than scientific evidence. These are preliminary results and may change with more data over time, or more data from additional sites and from other markets. In particular, we don’t yet have a full picture of the costs associated with running these programs, or of the rate of customer repayment on the appliance loans. At the end of the study, the Lab will release an updated Innovation Insight with more data and an analysis of program costs.

The full results and analysis are published here, in the second paper in the Lab’s Innovation Insight series (see the first paper on the impact of reducing tariffs here). This series will provide ongoing, early insights on the prototypes we’re testing, so mini-grid developers, governments and funders can act on the results as they emerge.

The Lab is endorsed by the African Mini-Grid Developer Association (AMDA) and supported by the University of Massachusetts Amherst, Carnegie Mellon University and Duke University, who provide advice and support on experiment design, survey design and analysis of results.