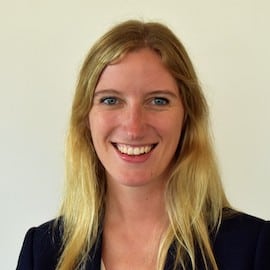 Jane Dougherty is a senior associate at CrossBoundary Group. She is based in the Nairobi office, where she leads data analysis and reporting for the Mini-Grid Innovation Lab.

Prior to joining CrossBoundary, Ms. Dougherty worked at the Busara Center for Behavioral Economics in Nairobi as a Research Specialist. She conducted research projects on mental health and sanitation practices in rural Kenya with economists at Princeton University, Harvard University and the University of Oxford. Ms. Dougherty has also worked in research in Uganda, Ecuador and the Dominican Republic on behalf of organisations such as the World Bank and Innovations for Poverty Action.

Ms. Dougherty holds a Master of Public Administration degree from Columbia University’s School of International and Public Affairs, a Graduate Diploma in Economics from the London School of Economics, and a Bachelor of Arts in Classics from the University of Oxford.