Milling on Mini-Grids: How Africa’s Largest Crop Could Go Diesel-Free

Editor’s note: This post is part of the NextBillion Series “New Frontiers in Renewable Energy” that explores the dynamic changes reshaping the sector.

Each day, Joseph waits for a queue of customers to gather in front of his grain mill in Kigbe, a village in central Nigeria. Once the queue builds up, or customers become impatient and threaten to leave, he powers on the mill, and grinds his customers’ maize into flour. Joseph makes enough profit from this processing to justify the $200 he spends on diesel each month running his mill. 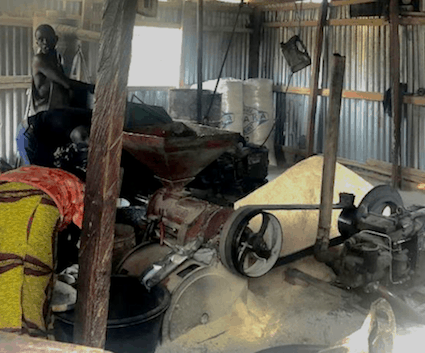 The grain mill operator at Kigbe, Nigeria uses diesel to power his mill.

Around him, households and businesses use electricity from a solar-powered mini-grid installed by Havenhill Synergy, a Nigerian mini-grid developer. The mini-grid lights their homes, charges their phones, and runs refrigerators to keep drinks cold. So why does it not power Joseph’s mill? Because, as the International Finance Corporation put it in their 2019 PULSE Report, “Solar powered agro-processing units [such as grain mills] do not currently match diesel units in terms of performance at any scale.”

Grain milling is one of the most important productive uses of energy for people living off-grid in rural Africa. Millers produce flour, an input of staple foods for the surrounding community, by grinding up maize – the most commonly produced cereal in sub-Saharan Africa. East Africa maize production accounts for almost one third of the continent’s annual harvest, and most of it is produced by off-grid smallholder farmers. Nearly every rural Tanzanian village has at least one grain miller; in Nigeria, there are often multiple millers in each village.

Grain mills sit at the heart of the energy-agricultural nexus in Africa. For millers such as Joseph, using mini-grid electricity to power their mills would save them money, give them a constant and reliable energy source, and eliminate the air pollutants produced by burning diesel. For mini-grid companies such as Havenhill, bringing grain mills onto their grids would significantly increase electricity sales, improving the economics for mini-grids. But diesel mills dominate the rural off-grid market, because no solar-powered electric mill exists that can match them on both cost and performance.

The Challenge of Competing with Diesel

Mini-grid developers have been trying for years to source a solar-powered electric mill that can compete with diesel. But diesel offers several advantages: A 2020 study by Energy4Impact and the Efficiency for Access Coalition Co-Secretariat, CLASP, found that solar mills cost twice as much as diesel mills to purchase ($2,000 vs. $1,000). The monthly energy spend to power an electric mill is also twice as much as that for a diesel mill (based on a typical Tanzanian mini-grid tariff), unless the developer offers a reduced tariff to high consumers. On performance, diesel mills have set the standard for throughput – the amount of grain milled per hour. A typical diesel mill produces approximately 120-150 kg of flour per hour. To be competitive, electric mills must match this throughput, because customers don’t want to wait: 63% of customers surveyed by the Energy Access Coalition won’t wait more than 10 minutes for a typical 20 kg bucket of maize to be ground. This demands a minimum throughput of 120 kg per hour. Diesel mills achieve this by having high power ratings – usually 7.5-20 kW in East Africa. Higher throughputs can be achieved by electric mills with similarly high power ratings, but 5-50 kWp solar mini-grids typically don’t have large enough inverters to handle the initial surge in current drawn by turning on a 15 kW mill. And investing in much larger inverters to serve a two-second surge in current isn’t cost-effective.

If a mill for solar mini-grids which can compete with diesel can be developed and scaled, the economics of mini-grids will change. Millers are reliable, high-earning and high-consuming energy customers. On average they spend $240 per month on diesel, at sites where the electricity spend of the average mini-grid customer is $5 per month. They also operate their machines largely during daylight hours, the cheapest time of day for a mini-grid to provide energy. 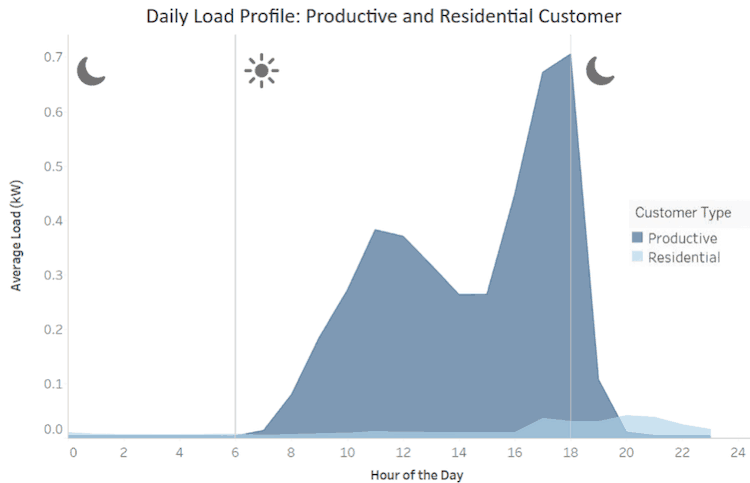 A mill operator at a mini-grid in Tanzania consumes energy primarily during daylight hours, while a residential customer at the same site consumes much less electricity, predominantly in the evening. Source: Innovation Lab

Moreover, millers are ready to switch: 95% of millers prefer solar PV to diesel as an energy source, and they’re even willing to pay more for an electric mill, so long as it can compete on operating cost and performance. But such a mill isn’t available on the market. Factor[e] Ventures has been signaling the need for innovation in productive use appliances like grain mills for off-grid use since 2017, but according to Acumen and CLASP, there has been “practically no commercial investment in productive use companies” as of the start of this year.

Developing a New Approach to the Electric Mill

The Mini-Grid Innovation Lab has been working with mini-grid developers on this problem over the last 12 months. Established in 2018 by CrossBoundary and The Rockefeller Foundation with support from Energy4Impact, and more recently supported by DFID and Shell Foundation, the Lab works with developers to identify and then test innovative prototypes that improve the business model. As these prototypes generate results, we share evidence on their impact so that successful innovations can spread. We also work closely with partners – developers, technology providers, governments and funders – to scale the prototypes across all participating developers and markets.

Under the Appliance Financing 2.0 prototype, the Lab worked with a coalition of partners on a new approach to the electric mill. Together, the partners developed an electric mill for use on mini-grids that we believe can outperform diesel. Factor[e] Ventures ran tests in their laboratory in Colorado on an electric mill previously sourced through China Impact Sourcing, and found the mill’s performance promising. The Lab then funded PowerGen, a mini-grid developer based in Africa, to work with China Impact Sourcing to procure single phase and three phase mills from China based on these best-in-class mill specifications. 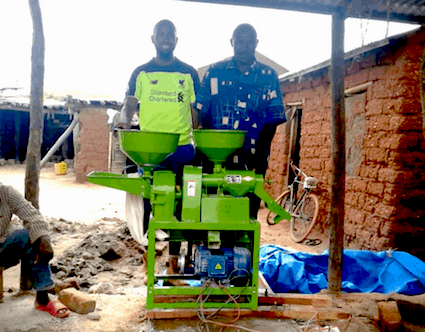 The first grain mill connected to electricity at a PowerGen site in Tanzania.

When the mills arrived in East Africa, they had to be customized to the local market to meet the output quality required by Tanzanian customers, and to match the best-in-class energy efficiency specifications of the mill Factor[e] originally tested. To optimize the mills, PowerGen simultaneously enlisted the expertise of Factor[e], Agsol, a private sector off-grid appliance manufacturer based in Nairobi, and SIDO, a Tanzanian government agency focused on promoting SMEs. They increased throughput by 50% by installing larger pulleys, and improved efficiency by adding a switch to run the mill’s rice huller and maize grinder separately. They also replaced the 1.5 mm sieves with 0.8 mm sieves to produce the finer flour that customers want, and installed soft starters to minimize the surge in power draw when the mills are turned on. The resulting mills are four times more efficient than diesel mills on the market, achieving 90 kg per hour throughput at a power rating of just 2.2 kW. While this is less than the 120 kg per hour target throughput, it translates to only three minutes additional waiting time. The flour produced is also now fine enough for Tanzanian customers to use in ugali, a staple food typically served with every meal.

For the Lab, proof of success is always based on performance in longer-term tests on the ground. Ten of these mills are now being deployed at mini-grid sites across Tanzania. If the initial results show promise, the Lab will work with global appliance suppliers, local manufacturers and developers to deploy electric mills at scale at mini-grid sites across the continent. We have partnered with Asaga Technologies, a China-based productive use appliance design and sourcing company for sub-Saharan Africa, and Shell Foundation to source more mills. We also plan to work with local manufacturers, such as Agsol in Kenya, to ensure that mills are customized to each local market.

This builds on others’ learnings and work in the sector, including the National Renewable Energy Laboratory and Energy4Impact, to overcome the challenges of deploying productive use appliances on off-grid systems. If the prototypes prove successful, the Lab will open-source the design specifications of these mills, and start working with additional distributors and manufacturers to scale production of electric mills ready for the off-grid market.

There’s also a broader lesson that can be drawn from this story. Throughout the process, every challenge and solution was owned by the people on the frontline, many of whom were not part of the original program when it started. We believe this is how innovation happens. It’s a messy, step-by-step process of continuous failing, learning and fixing, led by the “do-ers” on the ground. As the political scientist James Scott said, “Plan on human inventiveness. Always plan under the assumption that those who become involved in the project later will have or will develop the experience and insight to improve on the design.” And we have no doubt about the value of the “human inventiveness” of the partners who joined later in the program, such as Agsol, SIDO and PowerGen’s local operations team. We are hopeful this iterative process of innovation will transform grain milling for smallholder farmers in Africa, and at the same time dramatically improve the economics of mini-grids.

Main photo: The 10 mills procured by China Impact Sourcing at PowerGen’s workshop in Tanzania.  Photo courtesy of the authors.

Sorry. This form is no longer available.