Does Size Matter?: Study finds emerging companies are doing just as well as large, established counterparts when it comes to reaching BoP beneficiaries

The report Breaking Through – Inclusive Business and the Business Call to Action Today published in September reviews the progress made by 94 inclusive business initiatives towards providing benefits to people at the Base of the Pyramid (BoP) while achieving commercial success. The flagship report from Business Call to Action (BCtA) identifies five key strategies that companies are implementing to achieve scale, including carefully chosing partnerships, creating greater willingness to pay for products and services, using ICT to unlock new opportunities, turning regulation into a positive force, and securing appropriate finance and internal buy-in.

The report led us to ask two important follow-up questions:

Based on analysis of the whole BCtA portfolio, and more in-depth data on 49 business initiatives, we estimate that at least 200 million people in around 40 million households are benefiting to date, with most of this accounted for by the 18 largest initiatives. The chart below shows the range of reach achieved by the 49 initiatives that reported back.

Meanwhile, revenue levels of BCtA initiatives vary widely, from around zero to tens of millions of dollars per year. Amongst the 36 companies (out of nearly 100 BCtA member firms) that shared information on their annual revenue by initiative, most are generating somewhere between $1 million to $10 million per year, while six are generating above $10 million. 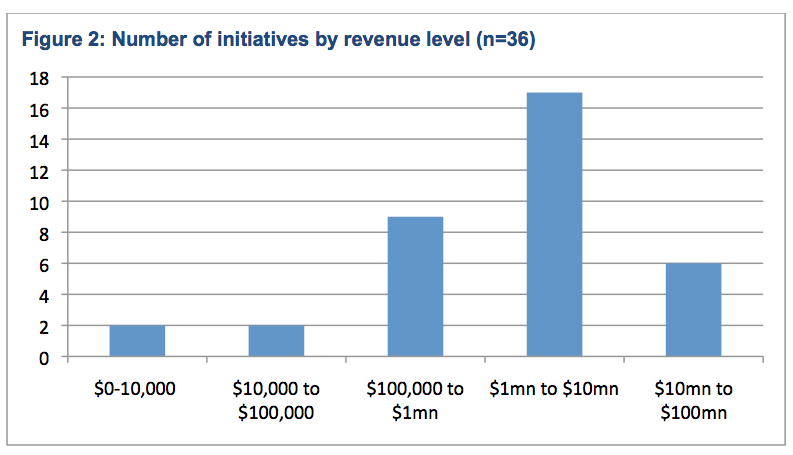 These headlines on reach and revenue tell us something about the scale achieved by BCtA initiatives to date, and there is some degree of correlation between the two. At the lower end of the scale, the initiatives generating less than $100,000 in revenue have also reached less than 100,000 beneficiaries. Those reaching higher revenue levels, however, post quite wide-ranging numbers of beneficiaries reached, often because the way beneficiaries are reached, and therefore the nature and depth of the benefits, is quite different.

Some of the initiatives reach very high numbers of beneficiaries through fairly light-touch models (typically as customers making small purchases), while others reach lower numbers through higher value or longer-term transactions (often as customers making major purchases such as housing materials, or as employees or suppliers).

Figure 3: Number of beneficiaries reached by revenue of the initiative 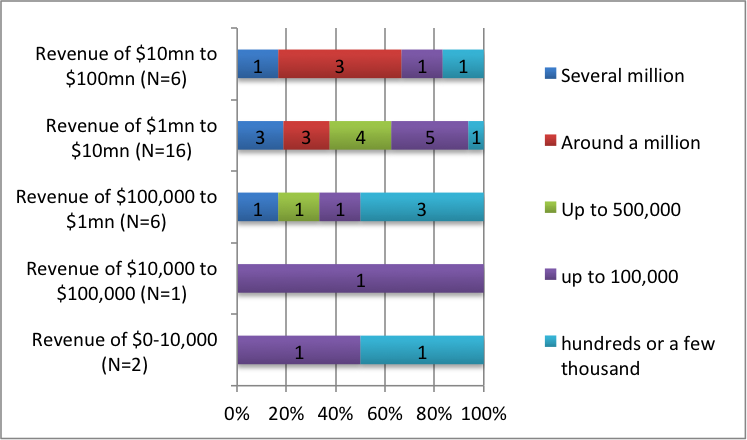 As with revenue generation, emerging companies are doing just as well as their large and established counterparts when it comes to reaching beneficiaries.

The idea of smaller emerging companies matching initiatives from larger companies might seem counter-intuitive on first glance. But the inclusive business activities of the emerging and maturing set are generally core business, while the initiatives of larger well-established companies often represent expansion or new business, and viewed through this lens the results are less surprising. Nevertheless, they do challenge the assumption that large companies are by definition the best route to scale at the BoP.

What about sustainability and profitability?

High revenue doesn’t necessarily mean high profit. Two of the emerging and maturing company initiatives in the highest revenue category report that they are not yet at break-even. As for the three top-earning large company initiatives, none are profit-maximisers. One is not intended to break even (it has attracted strong sales at a discounted price, with a motivation for corporate social responsibility and long-term growth of the market) and two have reached break-even but are not intended for profit maximisation.

Number of initiatives at break-even or profitable, by revenue level (n=34) 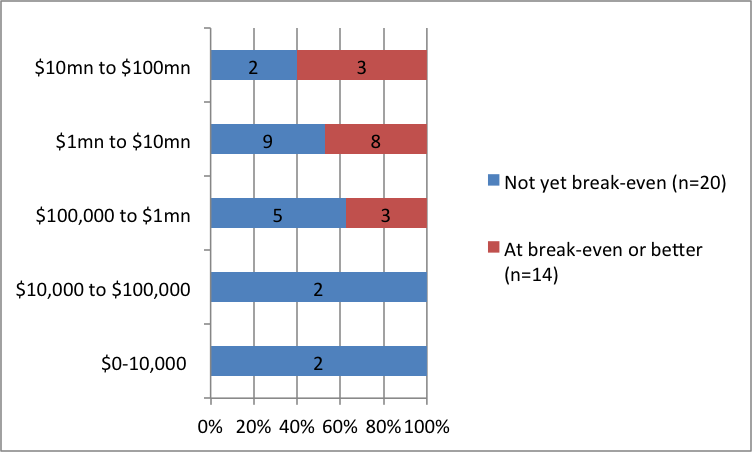 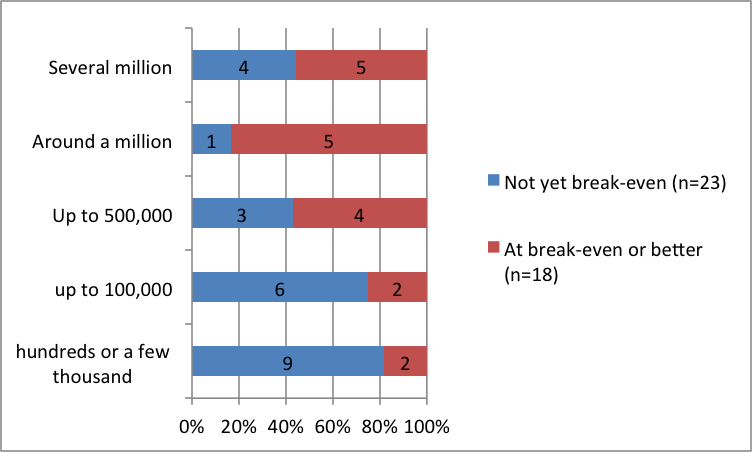 The data can be cut this way and that, but whichever way we cut it three messages are clear. Firstly, variety. Inclusive businesses are currently in all shapes and sizes. Revenue and reach are spread across all levels. Secondly, the emerging and maturing companies are performing just as strongly, if not better, than the initiatives of large companies, if measured by revenue or BoP reach. And thirdly, not all inclusive business are on track for scale and sustainability, but it’s clear that some are. There are indeed companies that are breaking through, reaching millions and achieving rapid growth to deliver some of the promise of inclusive business.

‘Breaking Through: Inclusive Business and the Business Call to Action Today’ is authored by Caroline Ashley and Suba Sivakumaran, in conjunction with Tomohiro Nagasaki, Lara Sinha, Suzanne Krook and Tom Harrison. Joe Shamash conducted the online survey and led the data analysis. Five years on since BCtA was launched, it reviews progress made by BCtA members and the strategies they are adopting. The report covers BCtA members’ 94 initiatives and draws heavily on surveys and interviews conducted with 49 initiatives during mid-2014. Join our discussion on social media using the hashtag #BCtABreakingThrough.

Joe Shamash is a monitoring and evaluation consultant and is currently the Monitoring and Evaluation Manager on DFID’s Impact Programme.

Editor’s note: This article originally appeared on The Practioner Hub for Inclusive Business and is republished with permission.

Tags
Base of the Pyramid, business development, research