Basic savings accounts are essential to helping people build assets, and they’re often the first step in building a relationship with customers.

This is something Acreimex—a savings & credit cooperative in Oaxaca, Mexico, serving over 120,000 members (as the cooperative refers to its customers) across eight states through its network of 45 branches—understands very well. Although they are a savings-based institution, some of their customers find it difficult to save. The cooperative has worked with BFA since 2016 to improve the profitability, relevance and accessibility of its product portfolio – and part of these efforts have focused on finding a way to introduce savings to its existing payroll loan customers.

Acreimex’s payroll credit product, Acreinómina (nómina means payroll in Spanish), is offered to employees in over 400 public and private institutions, and is currently the cooperative’s most profitable loan product. These same customers, however, tend to lack awareness of Ahorramás y Más (A++), the cooperative’s flagship savings product which all customers have, but not all use. To increase use of A++ accounts by Acreinómina customers, Acreimex and BFA built on the success of this specific loan product, automating savings alongside the payroll credit payments to drive uptake and usage.

Acreinómina has been successful because loan repayment is automatically debited from the employee’s salary over a fixed term. But unfortunately, while the product is both profitable and widely adopted, it does not drive engagement of Acreinómina customers, who consider it an incidental, employer-provided benefit. As such, most of these customers leave the cooperative after their employment ends without having used or acquired additional products from the institution; some never even know which institution is behind the loan offering.

BFA’s customer insights team identified these payroll loan customers as an opportunity to expand Acreimex’s outreach and profitability. They found that many customers have income sources in addition to their formal jobs and could benefit from longer-term savings. Moreover, many payroll customers already save using other instruments or institutions, but not with Acreimex.

Considering the design of the successful payroll loan product, BFA and Acreimex decided to pilot test A++ as a “painless” payroll savings plan with existing Acreinómina loan customers. 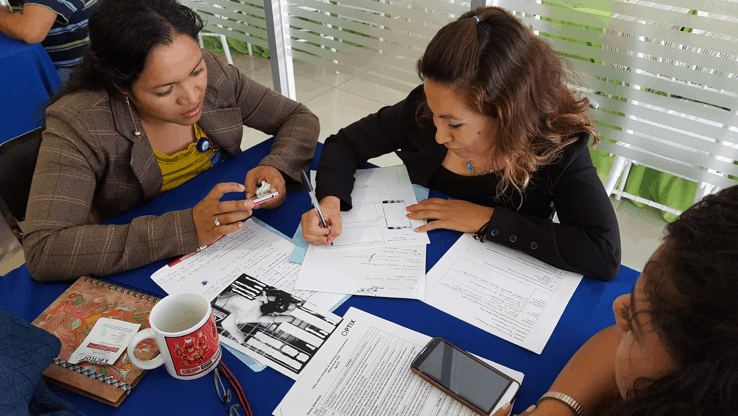 Beginning in April 2016, BFA and Acreimex conducted a 12-month pilot with 15 partner employers already offering Acreinómina loans to their employees. As part of the pilot, BFA monitored progress via biweekly phone calls with credit officers and monthly reports generated from Acreimex’s internal Management Information System. Additionally, BFA conducted qualitative phone interviews with 47 employees during months 8-10 of the pilot to gauge their satisfaction with the savings product. Pilot participants selected a predetermined savings amount to be directly debited from their payroll at the same time as their Acreinómina loan payment. This additional amount, typically between $100 to $400 Mexican pesos ($5 to $28 USD) per month, was placed into the A++ savings account with no penalties for withdrawal at any time, with the intention that customers would use it as a medium- to long-term deposit account.

Members signed up for A++ and continued to use it

Based on 1,279 eligible members across the 15 pilot employer contracts, Acreimex set a target of 30 percent adoption of the A++ automatic savings pilot. This goal was exceeded by 27 percent, as 38 percent of eligible customers (488 out of 1,279) completed at least one pre-committed amount deposit into savings. What’s more, 78 percent of deposits that customers committed to making when enrolling for the product were ultimately made.

As seen in Table 1, pilot participants held higher median savings account balances and made more deposits than non-pilot participants who already held the Acreinómina and A++ product combination, as well as those with only A++ accounts. 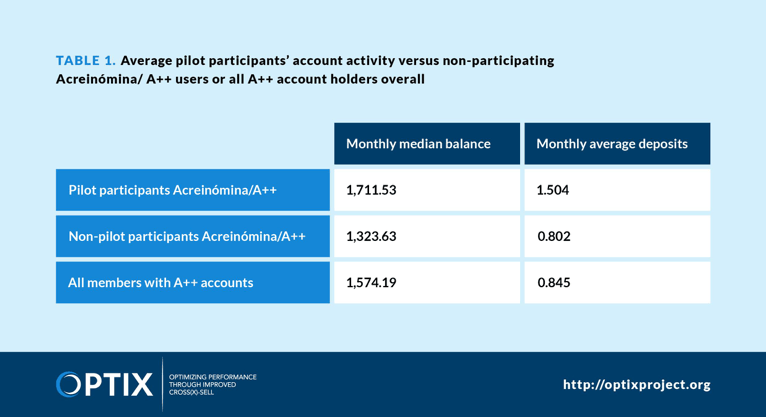 Acreimex was concerned about “dump and pull” behavior, in which the customers would immediately withdraw the automatic deposits instead of letting the balance accumulate. Happily, they found that only 4 percent of A++ account holders exhibited this behavior. 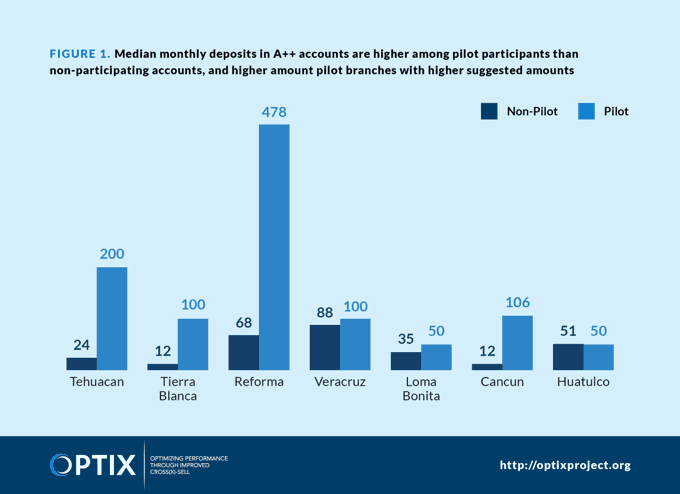 In practice, BFA believes participation rates could easily be higher since delayed and duplicated deposits were not counted, and many eligible customers were never even offered the product because they didn’t visit the branch to sign up for the automated A++ savings plan during the pilot.

In other cases, the customers who didn’t take advantage of the pilot offer reported not having enough money to save, or were already saving through another product, such as an employer-provided savings fund.

Customers noted that they liked the savings product’s stealthiness. In their minds, A++ sweeps away the money along with any temptation to spend it, while also removing the inconvenience of having to physically go deposit the funds at a branch. One customer noted that, “If you have your salary handy, you spend it.” Automatic savings affords customers peace of mind by enabling them to amass a useful lump sum (plus accruing compound interest) in the safety of a trusted institution.

Customers also liked having access to the funds for emergencies or unplanned spending. Nearly 70 percent of interviewees reported wishing to save long-term without a predetermined withdrawal period.

Acreimex’s board has decided to scale the pilot to select employers who are willing to offer this employee benefit. BFA will monitor the results over the next few months, as well as the balances of their savings accounts. Follow OPTIX for more lessons on successful client-centric cross-sell strategies.

Lauren Oldja is an Associate at BFA.

Gabriela Zapata is an independent Consultant and BFA Senior Associate.