Diving into the Gap: What Separates Savers from Non-Savers?

Editor’s note: This is the fourth in a four-part series from FINCA International on what the World Bank’s latest Global Findex report reveals about the state of financial inclusion and the challenges ahead as we strive for a fully inclusive world. Read the first post in the series here: Don’t Throw the Banks Out with the Bathwater: Why the 2017 Findex Shows Opportunity for Microfinance Institutions. Read the second post here: A Shifting Frontier: How Mobile Money is Reshaping the Gender Gap in Financial Inclusion. Read the third post here: Fewer People are Saving: What Does That Mean for Microfinance and Mobile Money?

Since the release of the World Bank’s Global Findex in April, our organization, FINCA International, has been looking closely at the data to refresh our perspective on the challenges of universal financial access. This is a topic that interests us deeply, as the founder of one of the largest microfinance networks of its kind, FINCA Impact Finance. From an initial reading of the data, three things have stood out to us so far.

First, we saw that, despite all the hype, mobile money has yet to displace traditional banking in most of the world: Even in parts of Africa where mobile money is becoming ubiquitous, it still often goes hand-in-hand with traditional banking and microfinance accounts. Second, we noticed the uneven impacts of mobile money on closing the gender gap in financial inclusion: If these disparities are not addressed, then the digitization of financial services can create yet another barrier to equality. Third, we explored the worrying decline in savings rates around the world: Unfortunately, it seems that the tasks of saving money and coping with emergencies are getting harder for those who live in developing countries.

In this final article for our series on the Findex, I’d like to dive deeper into the issue of savings, given its importance for financial inclusion and for the resilience of economically fragile households. I’ll do so by looking through the lens of FINCA’s mission, exploring how the declining savings rate impacts the most vulnerable – especially women, the poor, the unemployed and those with limited education.

The falling savings rate extends beyond the purview of microfinance institutions and banks, because it includes both informal and formal means of savings. Whether money is saved in a jar or in a bank account, it would be captured in the Findex indicator, “saved any money in the past year.”  From the perspective of household welfare, how a family saves money is less important than if they can save at all.

To delve into this issue, the Findex database allows us to explore data by gender, income, labor force participation and education, which are key vectors of inequality. This enables us to explore different forms of social and economic vulnerability, such as the difference in savings between the bottom 40 percent of income-earners versus the top 60 percent, or between people of lower and higher levels of education. With two full waves of data (2014 and 2017), we can also see whether these gaps are growing or shrinking, as shown in the chart below. 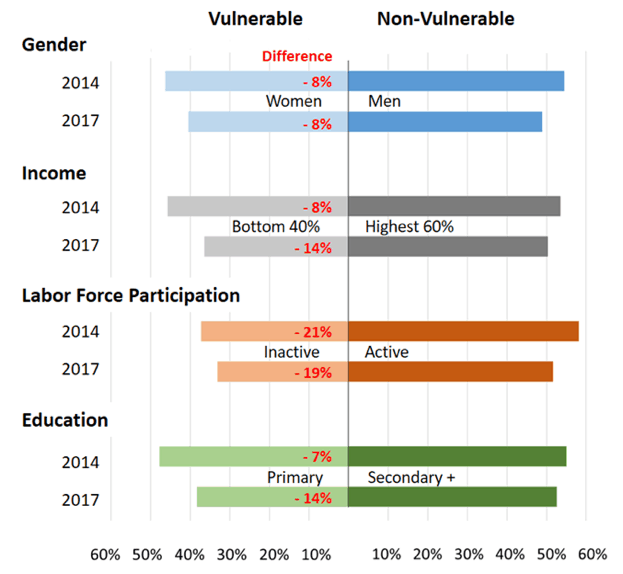 The first thing that jumps out is that savings are down across the board, among both vulnerable and non-vulnerable groups. This is consistent with the findings we have already discussed, which described the challenge this trend presents to financial institutions. Unsurprisingly, however, the biggest drops in savings are on the side of vulnerable populations, such as women and the poor. (Note: The geographies included in this analysis are the 20 countries in the FINCA Impact Finance network, but these results are representative of all low-income, developing countries.)

In the chart, numbers in red represent the difference between the savings rate of the vulnerable and non-vulnerable populations for the given year. Going back to 2014, women were 8 percent less likely to save money than men. The biggest gap that year—a whopping 21 percent difference—was between people who were active in the job market and those who were not.

Looking at 2017, labor force participation is still the primary driver of whether or not someone has saved any money. Likewise, the gender gap is unchanged from three years ago, at 8 percent in the 20 countries where FINCA is engaged in microfinance. One might conclude that industry efforts to promote women’s financial inclusion have yet to bear much fruit. However, while gender inequality has stayed the same, other forms of vulnerability have gotten considerably worse.

Inequalities in income and education are now more significant in dividing savers and non-savers. An 8 percent gap in 2014 between the poorest 40 percent and the richest 60 percent became a 14 percent gap in 2017. Similarly, the gap between primary and secondary school graduates doubled from 7 to 14 percent. That means gender, as a driver of inequality in savings rates, has fallen to the bottom among these factors.

This is not to diminish the continued need to focus on women’s equality as a principal goal of economic and social inclusion, because gender itself cuts across the other categories of vulnerability. Women have lower labor force participation rates, for example, and are more likely to be unemployed. But customer characteristics, such as being poor or uneducated, are higher obstacles to savings than they were three years ago, and they have passed gender per se as drivers of different outcomes.

Changes in the savings rate between vulnerable and non-vulnerable groups also vary a lot by region, as shown in the chart below. In Eurasia, savings is driven mainly by income, which even surpasses labor force participation as a factor: The poor are 19 percent less likely to save than anyone else. In the Middle East and South Asia (MESA), no particular form of inequality stands out, which is striking given that this region has one of the highest rates of gender disparity. In Latin America, the real inequalities arise in education. People with only a primary education are 24 percent less likely to save, which is the biggest gap among all forms of inequality in the world.

The influence of education on savings is also very strong in Africa, though the biggest driver of inequality is labor force participation, which generates a gap three times higher than gender, the least influential factor. Education is the next biggest driver, followed by income. The relatively small influence of gender on savings behavior is easy to understand, since African women tend to have better access to informal savings mechanisms, like rotating savings and credit and associations (ROSCAs). 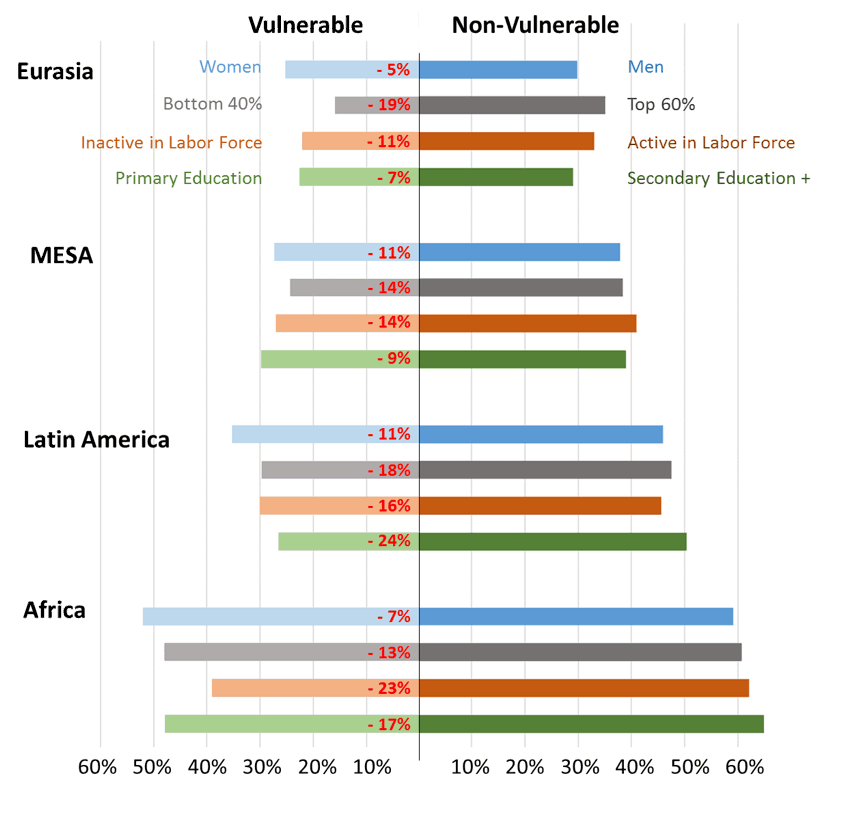 Most of the financial behavior represented in these graphs—saved any money in the last year—takes place outside of formal institutions. So, these trends do not tell us whether regulated financial services have become more or less accessible, or to whom. Instead, they reflect the financial behaviors of consumers, by showing who is saving money in any form, and who is not. In that respect, these results portray the division between savers and non-savers in basic social terms.

How do we reconcile this picture of a growing gap in savings with the fact that, in general, poverty is falling throughout the world? A commenter from our last article observed that very poor people consume after saving enough money to cover contingencies. As they grow past subsistence, their preference shifts from savings towards consumption. If the bottom 40 percent are better off today than they were three years ago—and, thus, more likely to consume their income—then that would partially explain why there is a growing gap in savings rates by income level. At the same time, however, it is possible that poverty overall may be falling even while conditions for those at the very bottom are getting worse, to the point that savings is simply not an option for more people.

Considering all the evidence, I’d lean toward the less optimistic scenario. For one thing, the persistent and overwhelming influence of labor force activity (or inactivity) clearly points to a population whose financial behavior is more likely shaped by a lack of resources than a preference for consumption. In the same vein, the spread of secondary education will clearly grow the pool of potential savers…but it leaves an even bigger gap for those who don’t make it past primary school.

Education instills cognitive skills, such as basic numeracy, that are fundamental for achieving financial health. But it also lays the groundwork for more advanced skills, like the ability to operate in a digital environment, that are increasingly needed to be financially competent. Reversing inequalities in education and labor will build a stronger customer base for savings mobilization and strengthen the foundations of a more inclusive financial system, especially one that is increasingly based on technology. Otherwise, the gap between savers and non-savers is likely to keep growing.