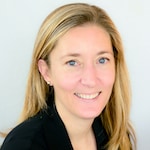 Andrée Simon is president and CEO of FINCA Impact Finance, a global provider of
responsible financial services. FINCA’s network of 21 community-based banks offers
responsible and affordable loan and saving products that empower low-income women
and men to take control of their financial future.
Previously, Simon served as vice president and COO of FINCA International, returning to
FINCA after serving for several years as president and COO of Women for Women
International, a humanitarian organization dedicated to financial, educational, and
interpersonal support of women survivors of war, poverty and injustice.
Prior to this, she was deputy to the president and CEO of FINCA for more than seven
years, where she was pivotal in redesigning the organization’s business model from
non-profit, donor-based to a for-profit operating structure. Simon has significant
experience in corporate strategy and she has held various business and advisory roles
in other organizations, including the Center for Strategic and International Studies.
Simon has been a board member of Women Advancing Microfinance International.
She is fluent in French and Spanish. She earned an undergraduate degree in
international relations from the University of Virginia, an M.A. from The Johns Hopkins
University School of Advanced International Studies, and an M.B.A. in finance from the
University of Pennsylvania’s Wharton School.