Mini-grids are self-sufficient electricity grids that serve households and businesses isolated from or integrated with the main grid. Due to reductions in the cost of the underlying technology, we at CrossBoundary estimate they are now the cheapest way to deliver power to at least 100 million Africans who are living without electricity today.

To help fulfill this potential, CrossBoundary and The Rockefeller Foundation established the Mini-Grid Innovation Lab in 2018, supported by Energy4Impact, to develop the mini-grid business model in Africa. The Lab works with mini-grid developers to identify and then test innovative prototypes that improve the business model – and as the prototypes generate results, it shares evidence on their impact so that successful innovations can spread. It also works closely with partners – developers, governments and funders – to scale the prototypes across all participating developers and markets.

An early prototype – exploring the impact of price

One of the Lab’s first prototypes explores new approaches to the electricity tariff (price) that mini-grids charge consumers. The tariff is obviously one of the major drivers of the mini-grid business model, for both the mini-grid operator and the customer. Rural mini-grid customers typically pay much higher electricity tariffs, and consume much less energy, than rural public utility grid customers. This is because private rural mini-grid companies must charge their customers tariffs that reflect the full costs of providing power. And rural customers connected to the public utility grid typically pay much lower tariffs, as their cost of power is subsidized indirectly by the utility’s higher-consuming urban or industrial customers, and often directly by connection subsidies from development actors such as the World Bank.

Early results from the Lab’s tariff prototype show that rural mini-grid customers are extremely price sensitive – and they are ready to consume much more power than they can afford at current tariffs. In May and June of 2018, the Lab helped two mini-grid developers in Tanzania to significantly reduce their tariffs on two small, rural sites – by 50% on one site (Site 1 in the chart below) and 75% on the other (Site 2). 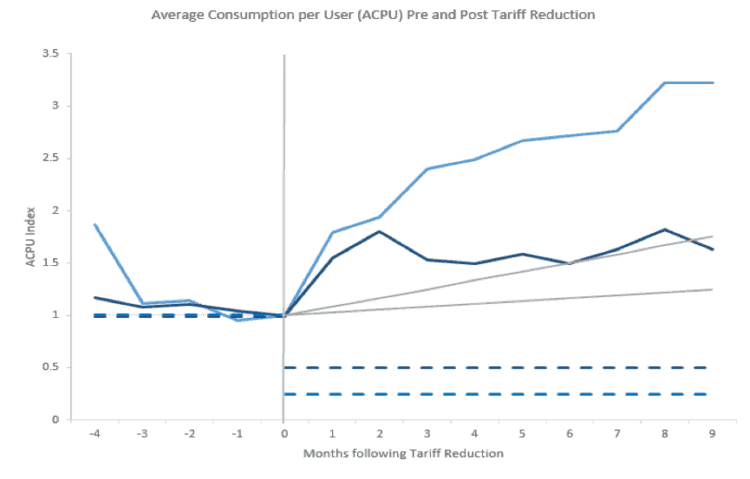 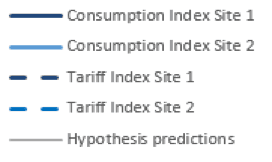 As the graph above shows, customers reacted immediately. Across both sites, for every dollar they saved on price, the average customer spent $0.93 on increasing their energy consumption. Therefore, despite massive price reductions, developers saw revenues fall by only 7%.

We can make two significant observations from this initial data:

This is a significant insight for developers. However, it is important to qualify that greater consumption is not cost-free for them. It requires investment in generation and storage, which means added costs to serve the increased demand. A tariff that is too low could be below the levelized cost of energy of the system. And while these initial results are promising, neither of the two mini-grid developers who participated in this prototype could have reduced their tariffs without funding support from the Lab in the form of a tariff subsidy. Therefore, we won’t know how lowering tariffs impacts the business model until we have a complete picture of the associated costs. The Lab will present this analysis in the second release of this paper.

It’s also important to emphasize that this initial data represents actionable business intelligence rather than scientific evidence. The data sets are small (128 customers across two sites), customers at both sites are low energy consumers relative to other mini-grid customers, and the prototype is only nine months into its five-year life. These are preliminary results and may change with more data over time, or more data from additional sites and from other markets.

To that end, the Lab will soon add a third site, bringing total connections under the prototype to 332. It is also working with mini-grid developers and funders to further prove the level of tariff reduction that will fully (and profitably) unlock customer demand. The Lab will test tariff reductions on sites in new countries in Africa, with different types of customers, different tariff structures and different grid sizes.

The full results and analysis are published here, in the first paper in the Lab’s Innovation Insight series. This series will provide ongoing, early insights on the prototypes we’re testing, so mini-grid developers, governments and funders can act on the results as they emerge.

The Lab is endorsed by the African Mini-Grid Developer Association (AMDA) and supported by the University of Massachusetts Amherst, Carnegie Mellon University, and Duke University, who support the experiment design and analysis of results.